Weekly review - consumers cut back and stocks get cheaper

November 15, 2008
Another wild week is now in the books. Just as it looked as if stocks were breaking to new lows Thursday, a furious rally ensued, taking the major averages up roughly 10%. Unfortunately for the bulls, that was the only up day in the entire week.

As I wrote in an earlier post this weekend, companies and economic reports were pretty consistent in declaring that the U.S. consumer is toast. Retail sales were off sharply, Best Buy and other retailers reduced their outlooks. Even Wal-Mart, one of the few companies that seems to be navigating this downturn successfully, predicted results would be slightly under previous guidance. Intel also reduced their near-term outlook and analysts rushed to reduce estimates on all the companies in the PC food chain. Dell got hammered as did Microsoft. Nokia also chimed in by announcing a softening in the cell phone market and Qualcomm and other component makers slid in sympathy. Circuit City declared bankruptcy. Jobless numbers crossed the threshold over 500,000, a number that typically is seen during recessions. Markets sold off this week, rallied strongly on Thursday in the face of the worst news and then sold off again on Friday.

The end results of all this were sizeable losses for all the major stock averages, ranging from a loss of 5% on the Dow to a loss of 9.7% on the Russell 2000. Predictably, the stock market statistics we gather every weekend reflected a second week of declining strength.

Each week our Alert HQ process scans over 7200 stocks and ETFs and records their technical characteristics. Primarily we look for BUY and SELL signals for our free stock alerts; however, we also summarize the data in order to gain insights in the week's market action. The following chart is based on daily data and, messy as it is, presents the state of our technical indicators: 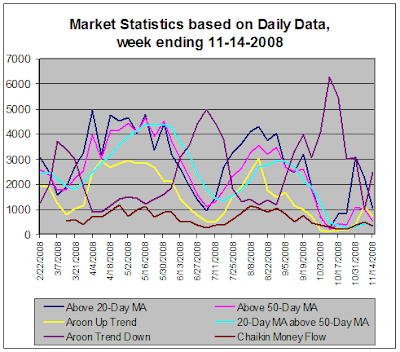 As you can see, the indicators are a mess. I'll quickly run through them:
The next chart presents the moving average analysis for the entire market in a simpler, cleaner manner and contrasts it with the performance of the S&P 500 SPDR (SPY). 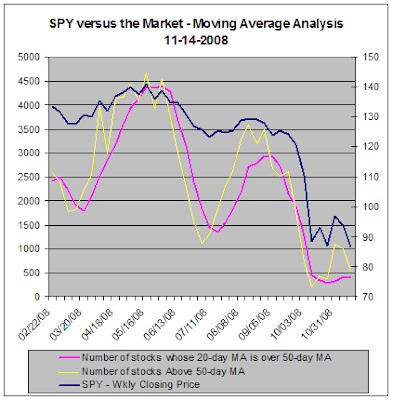 Note that a cross-over in the bullish direction took place about three weeks ago and thus far it remains intact but has been weakening rapidly. We are very close to registering a clear bearish signal.

We have maintained over the last few weeks that a tradeable rally had been underway and we originally expected the S&P 500, for example, to at least approach its 50-day moving average. Instead, it penetrated the 20-day MA and promptly fell back. The 20-day MA now presents resistance. According the chart above, the rally may still be alive since we have managed to avoid making significant new lows. Still, things are looking very shaky. At best, we are making a sloppy bottom. At worst, we are setting up for a further drift downward.

Looking at our stock market statistics based on daily data, pretty much everything is pointing in a bearish direction. Economic reports are doing nothing to paint a picture supporting higher stock prices. With the kind of wacky market we have seen these last few months, however, that probably means stocks are ready to rally.

So what is going on that might move investors one way or the other?

The G-20 met in Washington this weekend and so far nothing has come of it. The bailout for automakers is meeting resistance among Republicans who want to avoid throwing good money after bad. This implies one of the Big 3 might sooner of later declare bankruptcy and that would certainly cause a quake in the market.

Lest we forget, earnings season grinds on though at a slower pace. As if we didn't get enough bad news this past week, we have another bunch of retailers who will report this week. Investors will probably have to hold their noses as they review these numbers, too.

So the week that is upon us has plenty of opportunity to disappoint based on economic reports. Stocks have held above recent lows but that doesn't mean they can continue to do so.

Is seems the only argument for buying stocks is that they are cheap. This begs two questions: are they cheap enough and will they get cheaper still?

Anonymous said…
Changes in consumer behavior are driving a lot of the developments.