Quick chart review - stocks pop, can they keep it up?

November 24, 2008
Wow! Stocks have put together two days of rip-roaring gains. The major averages have added roughly 12% in barely two sessions. So where do we stand technically?

With charts a mess and moving averages pointing steeply down, it's worth looking at resistance and support levels.

The major averages have moved up aggressively but have not yet cleared the first resistance levels. Indeed, today they began penetrating above resistance but fell back. These are the levels we are watching:
A clear push above these levels would imply the current rally has legs. Failure to break above them would bring out the caution flag again. As an example, the chart of the S&P 500 is presented below. The resistance level described above stands out plainly. 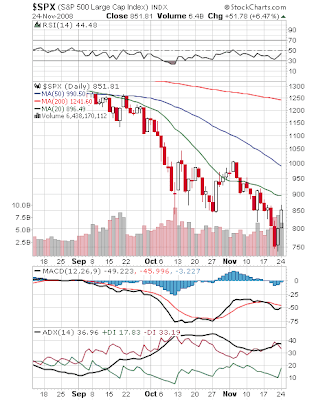 In closing, I would like to point out that none of the major averages have reached their 20-day moving averages yet. As an indication of how weak stocks have been, the last time the major averages came up against their 20-day MA, they tentatively moved above the 20-day and then promptly tumbled to new lows. Finally, looking at RSI, it appears stocks are no longer so terribly oversold. These developments are also illustrated in the chart above.

Nevertheless, sentiment is now positive, volume has been heavy on these up days and investors are hoping they see light at the end of the tunnel. Keep an eye on these levels, it might finally be time to nibble on some stocks.