Industrial Production - tech rolls over, too

November 17, 2008
The Federal Reserve just released the Industrial Production numbers for October. The headline number, a 1.3% gain, was unexpectedly good due to the resumption of refining and manufacturing activities in the Gulf region after hurricanes Gustav and Hanna. But what about tech?

Below we show a chart of Industrial Production for the sub-category of Computers and Peripheral Equipment. There is a clear drop off in production. In terms of percentage change, the current down-trend is not huge. What is disturbing is that typically the months of September and October show growth as manufacturers of computers and peripherals build inventory for the holiday shopping season. Here we see the opposite effect: rather than growth we have a decline. The numbers for the semiconductor sector look pretty much the same. 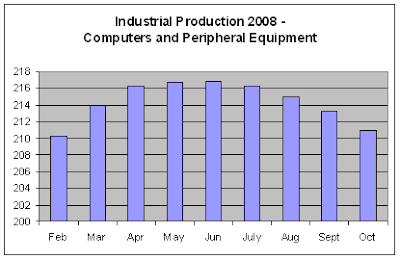 The next chart comes from the Federal Reserve. It includes Industrial Production and Capacity Utilization for high tech industries.

There are some interesting features in this chart. For one, technology has held up quite well compared to many other industry sectors. Take a look at the chart below that presents Consumer Durables, Industrial Materials, Business Equipment and a few others. Those sectors look like they are plummeting while Tech looks like it is merely encountering a slowdown.

It is undeniable that Tech is facing a serious slowdown. Witness the downbeat guidance from Cisco. The there was the surprise announcement from Intel that they expected revenue to come in $1 billion below forecasts.

Still technology seems to be in much better shape than some other industries. Comparisons to the 2001-to-2003 tech crash do seem unwarranted. Though production is slowing, tech capacity utilization is far above what was seen after the Internet bubble burst.

As I have suggested in a prior post, large cap tech could be the sector that leads stocks out of this bear market. Tech seems to be down but not dead. As we have rotated out of the leaders of the last bull market - financial and commodity stocks - investors are likely to embrace a completely different sector. Technology's latent strength makes it a good candidate.