Weekly review - stocks break down, can they dig their way out?

Citigroup continued its death spiral, announcing 52,000 layoffs while management failed to forgo bonuses and the stock price cratered. CEO Vikram Pandit railed against short sellers and "fear-mongers" while investors sold enthusiastically. Citigroup's move to take on around $17 billion of assets from a subsidiary fund caused investor alarm. Ironically, some of the analysts who had been very negative on the stock actually came out in defense of Citi and agreed with Pandit that the company has sufficient capital and enough federal backstops through various Federal Reserve and Treasury department programs to withstand the current downturn.

In general, financial stocks were all weak. Perception of rising problems in the commercial real-estate market and the Treasury's recent decision that TARP funds would not be used to buy troubled assets from banks were considered reason enough to sell the banks given the expectation that further write-downs would be seen to in order deal with the toxic waste still stuck on balance sheets.

The automakers were unable to convince Congress they had any clue how to turn their businesses around so they got back in their private jets and regally returned to Detroit. Congress is now in the unenviable position of being prudent with taxpayer money while being criticized for not doling out aid to support jobs.

The Fed released its minutes from the last FOMC meeting and the growth projections for coming quarters were much reduced. Expectations for real GDP growth in 2009 were lowered from the range of 2.0% to 2.8% to a much weaker range of -0.2% to 1.1%. The projections for the unemployment rate, meanwhile, were raised from between 5.3% and 5.8% to 7.1% to 7.6%. Seeing the Fed's dour outlook spelled out so clearly in the FOMC minutes further alarmed investors.

Friday's trade was marked by indecision until news came that Obama had selected Timothy Geithner as his Treasury secretary. This sparked a surge in stock prices and the market finished the week on a strong note. Despite the big rally on Friday, however, the losses on the week were severe.

Was it any wonder stocks fell?

Each week our Alert HQ process scans over 7200 stocks and ETFs and records their technical characteristics. Primarily we look for BUY and SELL signals for our free stock alerts; however, we also summarize the data in order to gain insights in the week's market action. The following charts are based on daily data and present the state of some of our technical indicators. 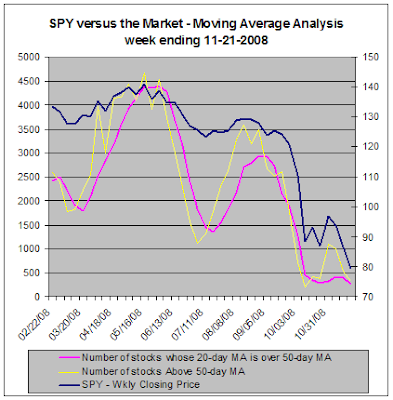 For the first time since we have been generating these statistics, this indicator provided a false signal. Even with the market deeply oversold, stocks were unable to follow through on what had been shaping up as relief rally. As can be seen above, the the number of stocks with positive moving average indications is declining again. Can the number go to zero? That sure looks like the next stop. Implication: bearish

This next chart is based on Aroon Analysis and compares our trending statistics to the performance of SPY. We use Aroon to measure whether stocks are in strong up-trends or down-trends. The number of stocks in down-trends (the red line) almost doubled this week to nearly 5000. The number of stocks in up-trends (the yellow line) fell by half from an already very low number to less than 350. Implication: bearish 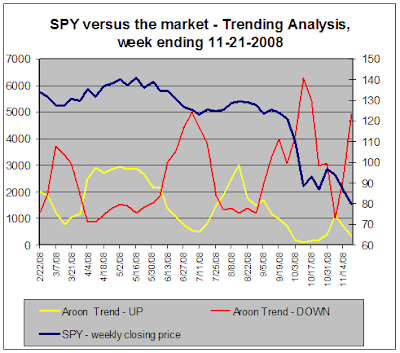 Not shown in the charts above is our Chaikin Money Flow analysis. We use this indicator to measure buying and selling pressure. Suffice to say, these indications are as bearish as the others already discussed. The number of stocks exhibiting buying pressure has fallen to the lowest point this year. The number of stocks exhibiting selling pressure has risen strongly though it hasn't reached its highest point this year. Implication: bearish

Our stock market statistics based on daily data continue to point in a bearish direction. Economic reports this past week were consistently negative.

What can get this market to follow through on Friday's rally? A perception that stocks are finally cheap enough to buy could provide some support. Further enthusiasm over Obama's activist agenda for dealing with the economic downturn might get investors looking forward to better days.

On the other hand, the upcoming week will provide some important data points and they could serve to knock this market right back to its lows. Existing home sales and new home sales will be announced and there is little expectation that these numbers will be particularly encouraging. Preliminary GDP could show further deterioration in the economy. Then we have consumer confidence and durable goods orders which, after the awful readings of the NY Empire State Index and the Philadelphia Fed manufacturing survey, can only be weak. Personal income and personal spending will probably show a consumer pulling back from the malls. Finally, there are initial jobless claims, Chicago PMI and the Michigan Consumer Sentiment index. All in a four-day week.

With markets deeply oversold and many traders on vacation this week, it would not be a surprise to see stocks tack on some gains. Still, resistance is not too far above and the economic backdrop continues to be bleak. Unless you are very nimble, there is probably no need to commit to stocks this week.