Weekly review - after the rally comes the wall of worry

November 30, 2008
Well, that was a short but stunning week! Major averages finished with double digit gains, the biggest weekly gains since the 1930's. What happened?

Once again, government actions were responsible for driving the stock market upward. The bailout of Citigroup was a major factor in Monday's rally as the Fed and the Treasury came through with another Sunday night rescue.

Further supporting stocks, a government commitment to purchase $600 billion of Freddie and Fanny mortgage-backed securities reassured mortgage lenders and MBS investors and had the knock-on effect of driving down mortgage rates. Despite poor numbers being reported for new home sales and existing home sales this week, the government action provided another glimmer of hope for the housing market.

To summarize the impact of the week's rally, the Russell 2000 gained 16.4% while the Dow gained 9.7%. The S&P 500 and the Nasdaq were in between with both showing double-digit gains. These gains were all the more surprising considering they were obtained in a mere three and a half sessions and despite the consistently bad economic data that was released during the week: durable goods orders were twice as bad as expected, Q3 GDP was revised down, personal spending declined and initial jobless claims, while better than the previous week, were still alarmingly high.

So, stocks soared. How did our technical indicators react?

Each week our Alert HQ process scans over 7200 stocks and ETFs and records their technical characteristics. Primarily we look for BUY and SELL signals for our free stock alerts; however, we also summarize the data in order to gain insights in the week's market action. The following charts are based on daily data and present the state of some of our technical indicators. 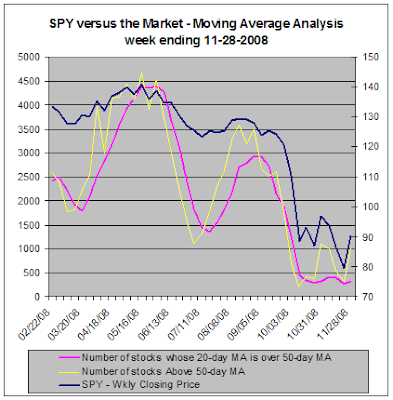 In looking at the latest developments on the chart above it appears the number of stocks above their various moving averages is bouncing around the lows and vacillating within a range. Is this what a bottom looks like? It could very well be. Implication: looking bullish unless economic reality overwhelms the positive sentiment

This next chart is based on Aroon Analysis and compares our trending statistics to the performance of SPY. We use Aroon to measure whether stocks are in strong up-trends or down-trends. The number of stocks in down-trends (the red line) fell by half this week to under 2500. The number of stocks in up-trends (the yellow line) increased slightly from a very low number under 350 up to s still low 472. Implication: maybe not bullish but clearly less bad 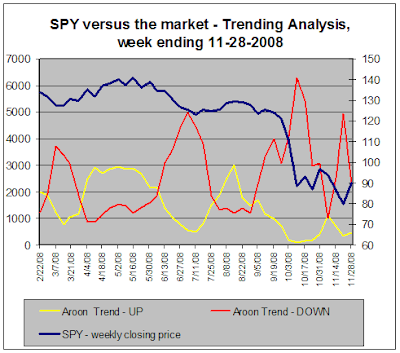 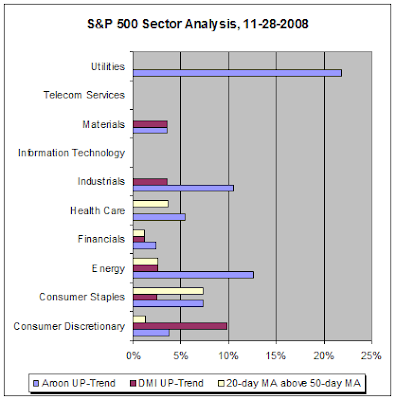 As the chart above shows, we are starting to see a little life in some of the sectors. Note that the chart's maximum is at only 25% so what we are seeing isn't all that impressive; nevertheless, things are looking noticeably better than they were during last few weeks. In particular, Energy and Industrial stocks are perking up a bit. Consumer Staples and Utilities have held up a bit better than the other sectors and the chart reflects that. It is also apparent that investors are betting on the return of the American consumer to the mall; hence, the pick-up in the Consumer Discretionary sector.

Our stock market statistics based on daily data are reflecting the robust gains notched by stocks this past week, gains that came despite economic reports that continued consistently negative. Technically speaking, it certainly looks like stocks are establishing a bottom and striving to push upward. Certainly, sentiment has improved tremendously in order to allow a rally of this magnitude.

Unfortunately, the economic backdrop has shown little if any improvement. Yes, the government continues to ride to the rescue and the credit markets are maintaining some semblance of improvement. Stocks, however, are no longer so oversold and the outlook is less than bright for employment, consumer spending and manufacturing. As a result, the rally is looking vulnerable.

This coming week, investors will be looking for any news that will continue to support the bullish case. There will be no lack of economic reports as we will see construction spending, ISM index, auto and truck sales, ADP employment, non-farm payrolls, ISM services, factory orders, hourly earnings, unemployment rate and consumer credit. Plus the Fed Beige Book will be released.

From a deeply oversold situation, stocks have bounced in reaction to more government intervention. The easy gains have been accomplished. Now, we will see if stocks can climb the wall of worry as the next batch of economic reports pours in.