This week the country participated in an historic election while stocks bounced up and down and then up again.

Major events for the week:
Against this backdrop, I was curious to see whether our technical analysis indicators would show whether the previous week's rally was dead or whether there was still some life in it. We are presenting two chart below that, hopefully, will help answer that question. The first one is somewhat messy so be sure to check out the second chart.

Each week our Alert HQ process scans over 7200 stocks and ETFs and records their technical characteristics. Primarily we look for BUY and SELL signals for our free stock alerts; however, we also summarize the data in order to gain insights in the week's market action. The following chart is based on daily data and, messy as it is, presents the state of our technical indicators: 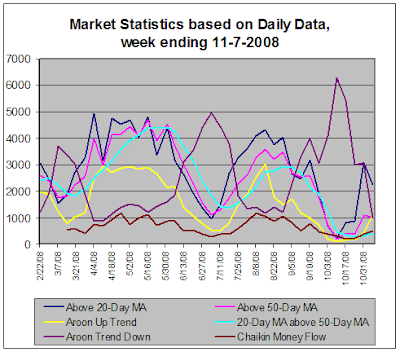 As for the trend indicators, we continue to see negativity diminishing and a glimmer of bullishness. We use Aroon analysis to generate our trending statistics. We see a much more noticeable increase in the number of stocks exhibiting strong up-trends. It is most encouraging to see the number of stocks exhibiting strong down-trends has decreased dramatically: four weeks ago, it was over 6000 stocks and now it is down to 1000, a drop of 2000 in just the last week.

We use Chaikin Money Flow to track buying and selling pressure. Happily we see another slight improvement in buying pressure this week.

The next chart presents the moving average analysis in a simpler, cleaner manner and contrasts it with the performance of the S&P 500 SPDR (SPY). 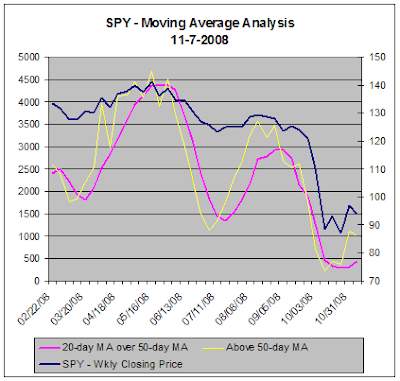 Note that a cross-over in the bullish direction took place a couple of weeks ago and thus far it remains intact.

We pointed out last week that we feel there is actually a tradeable rally going on. Despite the somewhat shaky performance stocks turned in this past week, this chart seems to be saying that the rally is still quite alive. Stocks may be making a messy intermediate term bottom but it looks very much like the market wants to rise.

Looking at our stock market statistics based on daily data, it looks like there is definitely some kind of bottom forming. Despite the mid-week slide in stock prices, it looks like the broad market held onto most of its strength as the charts above show continued improvement in our indicators.

Given the economic news lately, it is reasonable to assume that this will turn out to be an intermediate bottom and this bounce will end up being a bear market rally. Still, a rally is a rally, no matter whether it makes sense or not, and it seems like the market is poised to move up further.

There is a holiday next week and the economic calendar is light. Investors will only have a few reports to chew on including initial jobless claims, more retail sales, business inventories and the Michigan consumer sentiment index. The earnings calendar is also lightening up as we approach the end of earnings season.

So will investors continue the positive sentiment that drove stocks upward last Friday despite dismal unemployment numbers? I am betting they will. Is all the bad news already priced into stocks? For now, at least, I suspect it is. What do you think?