The screen looks for stocks with a reasonable valuation but also charts that are looking particularly attractive. Here are the criteria used for my loose value determination:
The following table is run against those stocks that were added to the Trend Leaders list this weekend after the close on Friday, Feb 26. The Trend Leaders list identifies those stocks where Aroon, MACD and Wilder's DMI are all bullish.


As I mentioned above, I also included those stocks who met the criteria for this screen and were also on the Trend Busters list. Only one stock qualified: Rowan Companies (RDC). As you can see, it is also listed above in the table of Trend Leaders. As the only stock on both lists, I'll choose RDC as the focus stock for today's post.

First, the technical analysis aspect. How can  the stock be on both the Trend Busters list and the Trend Leaders list? Look at the chart below: 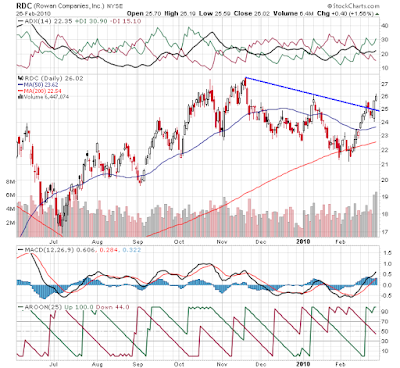 The chart shows how Aroon, MACD and Wilder's DMI are all fairly bullish due to the generally rising stock price since early February. In addition, I have added a blue line that shows how the stock has finally broken above a downward-sloping trendline whose high point was established back in November.

Rowan Companies, Inc. provides a range of onshore and offshore contract drilling services in the United States and internationally. Besides providing drilling platforms and rigs, the company also designs and manufactures drilling equipment.

In terms of the company's value assessment, it has a very low PEG of only 0.50, a PE of only 7.5 and it is selling for less than book value. Not shown above, the Enterprise Value/EBITDA is less than 5 which reinforces the fact that this appears to be a deep value stock.

Below I have a chart of the financials for Rowan Companies:

Explore more RDC Data at Wikinvest
As you can see, RDC has seen declining revenues and earnings for the last few quarters. However, hope springs eternal among investors and the stock has been rising as it's earnings announcement approaches. The company is scheduled to hold its conference call on March 1 so we should see whether rising oil prices have translated into higher earnings for RDC. The company recently received an upgrade to BUY from MKM Partners but the average analyst estimate for earnings per share is only $0.50 so it is very possible investors will be disappointed again.

One thing that has been holding the company back is the fact that it does not offer deepwater rigs to its customers. Unfortunately, that is where the growth is as well as the highest dayrates for renting rigs. This means the company is missing out on one the better segments of the drilling business. As a result, the CEO earlier this month announced that the company plans to buy some ultra-deepwater rigs and also strengthen its grip on the market for high-end jackup rigs, their shallow-water counterparts. The CEO also alluded to possibly relocating the business outside the U.S. (it is currently based in Houston, TX) in order to obtain a lower tax rate.

With earnings due on Monday, we will quickly see whether the new-found bullishness in RDC will show any follow-through.

As a last word in today's post, I'd like to point out that a more conservative choice from the table above might be Nash-Finch Company (NAFC). The company is involved in food distribution and food service and their recent earnings were up 185% with revenues were up over 15% year-over-year. Yet they also trade in deep value territory while offering a 2% dividend yield.

Explore more NAFC Data at Wikinvest
Nash-Finch also announces earnings this week, on March 4th. Analyst estimates seem to call for slow and steady growth with modest improvement over the year ago quarter. With an easy comparison to last year's poor quarter, though, NAFC might very well beat expectations and move to new highs.

Disclosure: no positions in any stocks mentioned in this article