Can you still be a bull when this market's technicals are so awful?

February 07, 2010
The family wants me to watch the Super Bowl with them and stop this darn blogging. And you know, I think that's a pretty good idea so I'm just going provide a really abbreviated post that looks at our Alert HQ overall market statistics.

The following charts are derived from data collected during our Alert HQ process and they provide a high-level look at a couple of the indicators we track across the whole market. 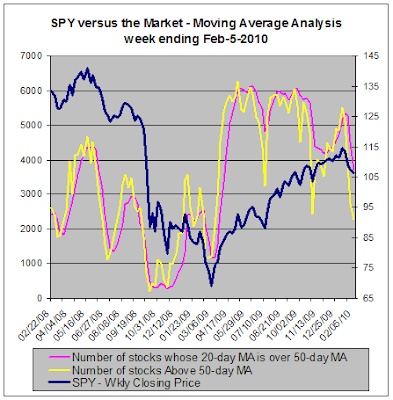 This chart shows the broad-based deterioration in the market. Almost 70% of stocks are now below their 50-DMA. The number of cross-overs to the downside has accelerated. I don't show it on the charts but roughly 75% of stocks have fallen below their 20-DMA, as well. We are midway between the extreme levels as we saw in March 2009 and the levels we saw during the two pullbacks in 2009. 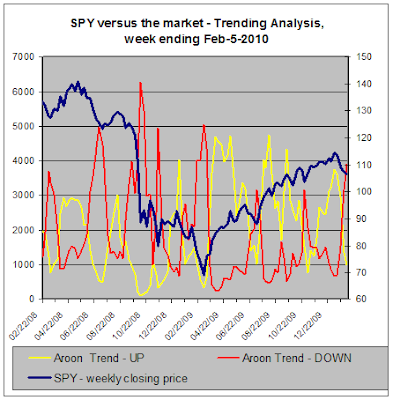 This chart tells a similar story. Current levels are midway between those seen at the market lows in March and during the pullbacks in September and November.

Conclusion - why I'm still a bull

OK, I have to ask: should the market be sinking to levels last seen when the fate of capitalism was in doubt and the financial system was teetering on the brink? I don't think so.

So the interpretation of these charts is that the market is greatly oversold. Unfortunately, markets can continue in an oversold mode until some catalyst changes investor sentiment. Luckily, we continue to see modest progress in U.S. economic reports. Improving fundamentals will eventually carry the day. As I said a week ago: do not short this market unless you're a trader.

Anonymous said…
interesting read. I would love to follow you on twitter. By the way, did you hear that some chinese hacker had busted twitter yesterday again.
February 8, 2010 at 7:27:00 AM EST

Anonymous said…
great read. I would love to follow you on twitter. By the way, did any one know that some chinese hacker had hacked twitter yesterday again.
February 8, 2010 at 7:32:00 AM EST