Reasonable value and attractive charts - 8 stocks you should know about

The screen looks for stocks with a reasonable valuation but also charts that are looking particularly attractive. Here are the criteria used for my loose value determination:
This first table is based on those stocks that meet the value criteria and are on the Trend Busters list. This list identifies stocks via automated chart analysis that are breaking out above a trend line. The following five stocks popped out when looking at the breakouts registered on Tuesday, Feb 16:

Here is the list of four stocks that made the grade:


One of the interesting aspects is that Core-Mark Holding Company (CORE) is on both lists. This is the second time they been broken above a short-term trend line (the blue and green downward sloping lines that start at the peak in early January on the following chart) and the overall aspect of the stock chart is that the stock is in a nice intermediate to long-term up-trend (as shown by the upward sloping magenta line). 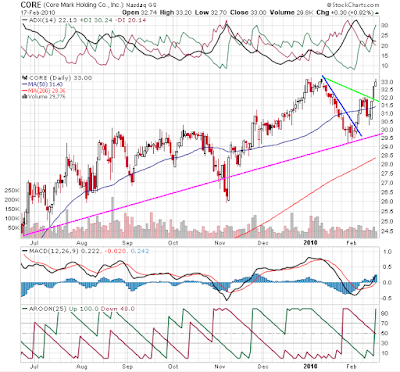 Core-Mark Holding Company, Inc. seems to be a mundane small-cap with a modest single-digit annual growth rate. CORE operates as a wholesale distributor of packaged consumer products to the convenience retail industry. The company serves traditional convenience stores, grocery stores, drug stores, liquor stores, and other stores that carry convenience products. As of December 31, 2008, it operated a network of 26 distribution centers in the United States and Canada.

After a poor quarter in 2Q2009, the company doubled its earnings in 3Q2009 though on a very modest increase in revenue. Investors seem hopeful that 4Q earnings will be similarly solid. Adding to the anticipation, the company recently projected 2010 revenues of $6.9 billion which would be a 6% increase over 2009.

So this is not exactly a company that is on fire but looking at the value indicators it does look like a company that has been undervalued by this market. Not shown, but also indicating low valuation, the Enterprise Value/EBITDA ratio is only 3.5 and that is generally considered to be a level indicating deep-value.

Note: I apologize for publishing this post a day late. A few of these stocks made dramatic gains today.