SanDisk goes wild - was it justified?

May 27, 2009
SanDisk (SNDK) had a wild day today, gaining over 14% and helping the NASDAQ outperform the other major averages. Was it warranted?

The news that drove the stock today was related to SanDisk reaching an agreement with Samsung who manufactures NAND memory chips using technology covered by SanDisk patents. The previous seven year deal will expire in August of this year and investors were holding their breath waiting to see how the negotiations for a new deal would play out. Now we know.

The companies have entered into another seven year agreement. This is good for both companies in that Samsung is now sure that it will have uninterrupted access to SanDisk's patents and SanDisk, in turn, will have a consistent, reliable revenue stream from the royalties. So far so good.

Samsung, however, will in the future be paying roughly half what the current agreement stipulates. In other words, the $350M that SanDisk receives on an annual basis now will be reduced to about $175M. As a sweetener for SanDisk, Samsung has committed to guarantee providing a portion of its NAND output to SanDisk. This helps SanDisk who derives 60% of their revenue by selling flash memory cards in the retail market by ensuring a steady source of supply at predictable prices.

So it would seem that cutting royalties in half should not be the kind of news that drives a stock up. In this case, however, investors seem willing to overlook the decrease. With Samsung the largest source of royalties for SanDisk and producer of 30% of flash memory worldwide, it was imperative for SanDisk that the two companies come to some kind of agreement. With SanDisk pulling in over $3 billion in sales annually, the royalties are a significant portion of revenue but are far outweighed by sales of physical chips. Which brings me to my next point.

Investors seem to be willing to give SanDisk the benefit of the doubt because NAND flash memory prices have gone from a low of $1 per gigabyte back in January up to $2 per gigabyte. As supply and demand have come more into balance, this is the best kind of news for SanDisk's margins and, as pointed out above, chip sales do have greater impact on the company's bottom line than royalties.

Furthermore, SanDisk's CEO has been communicating optimism to the investing community.

He has indicated that the balance sheet is in much better shape lately, especially after receiving a cash infusion from Toshiba based on an agreement that turns over 30 percent of SanDisk's share of the current manufacturing capacity of the companies' joint ventures to Toshiba. In exchange, SanDisk is getting equipment-leasing cost reductions and cash amounting to about $1 billion.

CEO Eli Harari has also said that he was "cautiously optimistic" and that consumer demand has been stronger than expected. As the leading manufacturer of retail flash cards for phones and digital cameras, that is an outlook, if eventually justified by actual sales, that should indeed support the stock price. 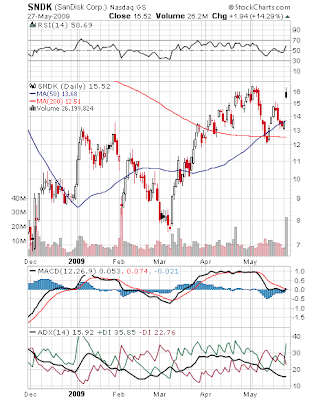 So was today's action justified? Probably not. The pop in the stock price (you can see the big gap up on the chart above) is based more on optimistic expectations than on solid results. If the strength in the retail market for flash memory begins to flag, it will be no surprise to see SanDisk start to slide again. It's true that the stock was severely beaten down but it has already nearly doubled since the March low. The stock is now susceptible to the vagaries of consumer spending and, if the market in general declines, SanDisk will follow suit.