May 15, 2009
Today the Fed released Industrial Production numbers for April. For the most part, the "less bad" theme remains intact.

The chart below presents month-over-month percent change for the three Technology sub-sectors. 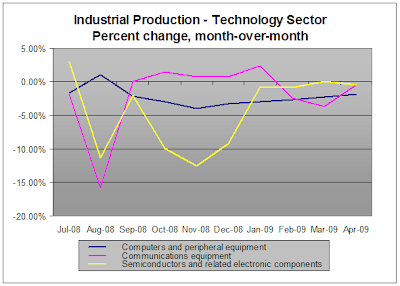 The Computers and peripheral equipment sub-sector continues to show contraction but it has been contracting less and less each month after hitting a low point back in November 2008.

Communications equipment has had a few weak months since January 2009 but here also contraction is now greatly reduced.

Semiconductors have carved a pretty erratic path since July of last year but now seem to be much more stable. Though there is still contraction here, too, it is much, much less than that seen last year. It is troubling that this past month saw production decrease a bit more than in the prior month but if the other sub-sectors continue to improve, this decrease could be easily erased.

I have often said that technology will lead us out of this recession and today's report, while not showing growth right now, is at least pretty close to showing growth soon if current trends remain in place. Unfortunately, the growth will be from rather low levels but when growth comes, it will be welcomed, I hope, with a rally in tech stocks.

Given the seasonality of technology, growth might actually be seen during the summer months as consumer electronics manufacturers begin to order parts for the end of year selling season. If we see some evidence consumers haven't totally fled the marketplace, tech could see a nice summertime rally.