May 25, 2009
When all was said and done, it was surprising to see that the major averages actually finished the week with small gains. It felt like a very negative, down week with many stocks falling four days in a row. What happened?

Housing starts were lower than predicted, initial claims remained stubbornly above 600,000 and FOMC meeting minutes from April showed the Fed's expectations for growth were even more downbeat than the previous month's. Affecting sentiment in the U.S., the S&P downgraded the outlook for U.K. sovereign debt from stable to negative. This prompted bloggers to begin debating when the same might befall the U.S.

Not everything was down. Commodities had a decent week as the dollar fell and crude oil prices jumped.

Against this backdrop of negative news, the statistics we collect at TradeRadar pretty much confirm a weakening of enthusiasm among bulls. The two charts below demonstrate the state of the overall stock market.

Each week our Alert HQ process scans almost 7300 stocks and ETFs and records their technical characteristics. The following charts are based on daily data and presents the state of some of our technical indicators. 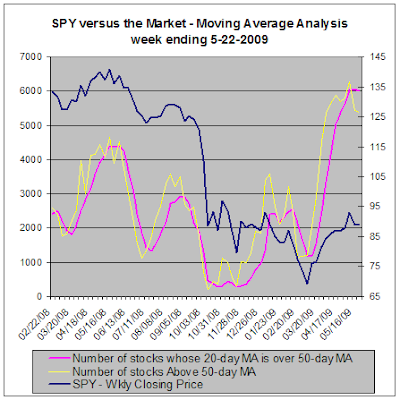 Last week we said our Moving Average chart was looking pretty "toppy". This week, the situation has further worsened. The number of stocks above their 50-DMA has decreased again and the line showing the number of stocks whose 20-DMA is above their 50-DMA has started to roll over. It could be a long way down from current levels which are still quite high. 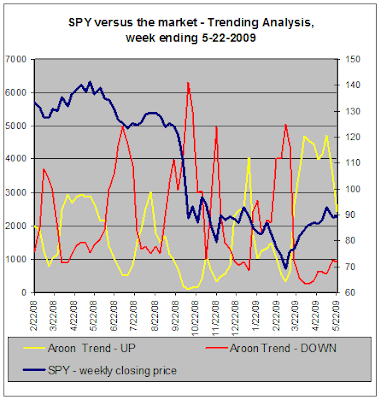 The last two weeks have had a serious effect on our trending statistics. The number of stocks in strong up-trends has really plunged. Levels are not where they were during previous market low points but these trending statistics show that the strong rally of the last couple of months has abated for most stocks.

Speaking of levels, many are watching the S&P 500 and looking to see whether the support level of $870 holds. Given the behavior of the market statistics we described above, it certainly seems that we will get a test of that level which, truth be told, is not very far away.

On the other hand, the NASDAQ 100, though off its best levels of the last few weeks, still remains slightly above it's 200-DMA and offers hope that stocks have not begun an irreversible slide.

With earnings season over, investors will be looking at world events such as the situation with North Korea and their missile and nuclear tests and the conflict in the oil producing region of Nigeria.

And, of course, there are the week's economic reports. It may be a shortened week coming up but there will be some significant ones. We will see the S&P/Case-Shiller Home Price Index, Consumer Confidence, Existing Home Sales, the Durable Goods report, Initial Jobless Claims, New Home Sales, preliminary GDP (a surprise could really move the market), Chicago PMI and Michigan Consumer Sentiment.

So with sentiment flagging, no major earnings reports on the way and stocks in a weakening trend, we are going to need some of these upcoming economic reports to come in above expectations. Otherwise, be prepared for support levels to be challenged and likely broken. We could easily find ourselves back to where we were two months ago.