Weekly Review - it's all about banks, jobs and Cisco

May 09, 2009
This week, the stock market focused on three major themes: banks, jobs and Cisco.

With respect to the banks, this week was all about the stress tests. Data has been leaking out about the test results for over a week now so when the official release came, there were no real surprises. As expected, 10 of 19 banks were identified as needing capital. Bank of America needed the most, $34B, as had already been leaked. Investors reacted with relief that the results weren't much worse and banks led the S&P 500 up strongly, with the index tacking on 5.9% this week. (For an interesting take on the impact of the stress tests on the chart of the S&P 500 and where we might go from here, check out this video from the folks at MarketClub)

As for jobs, we had both the ADP report and the government's Non-Farm Payrolls report. ADP came in much better than expected; ie, less people lost their jobs in April than lost their jobs in March and for the first time in a while, the number was under 600,000. The Non-Farm Payrolls report offered a headline number much like the ADP report. This was analyzed by numerous financial bloggers who pointed out the impacts of "seasonal adjustments", the always controversial birth-death model and the fact that the only entity doing any significant hiring is the U.S. Census Bureau (and those are only temporary jobs). In addition, unemployment rose from 8.5% to 8.9%. So the market rejoiced at a continuation of the "less bad" theme but these reports still paint a pretty bleak picture of the job market.

Finally, we have Cisco Systems (CSCO). The company reported earnings this week and they did manage to beat expectations. Investors, as usual, hung on every word of CEO John Chambers in the conference call. Mr. Chambers indicated that he is seeing some stability but he wouldn't go so far as to say that things were getting better. Investors reacted with disappointment as they interpreted his statement to mean that we may have reached a bottom in the tech sector but growth was not yet at hand. As a result, both Cisco and the NASDAQ lagged the rest of the market by far this week.

In terms of how we see things at TradeRadar, I want to present our usual two charts to demonstrate the state of the overall stock market.

Each week our Alert HQ process scans almost 7300 stocks and ETFs and records their technical characteristics. The following charts are based on daily data and presents the state of some of our technical indicators. 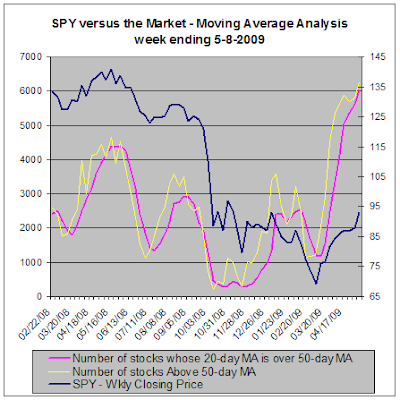 The indicators here just keep on climbing. I am surprised that this chart can keep showing such strength week after week without any pullback to speak of. It is clear that investors considered stocks to have been deeply over-sold at the March low and the current widespread strength is an indication that stocks needed to rise to get back to a range of fair value. At some point, weak companies will again drop and these numbers will come back to earth. In the mean time, we have a very broad-based rally on our hands. 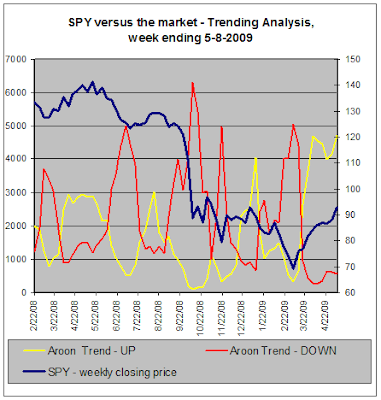 This chart exhibits continuing solid performance. Roughly two thirds of all stocks are in up-trends according to Aroon analysis and only 8% are in down-trends. We've been in this range for the last month or so and it is an indication of the fact that while some stocks may be taking a breather, investors are turning to other stocks and bidding them up.

Most economic developments this week, while not amazingly positive, were still supportive of the current rally. Investors now seem to be willing to wait for stronger earnings to materialize and for economic reports to show improvement rather than less contraction.

A note of doubt is creeping in, however, when looking at the tech sector. Tech led this rally early on but is now drooping. Semiconductors were down more than 4% this week. Tech shares in general were down over 2%. Contrast that with the fact that financials were up 18% over the same time frame.

So the worry is that there is now a divergence developing between tech and the rest of the market. Just as many said the market can't rise without the financials, so too it can be said that it will be difficult for the market to rise without tech.

As always, we will be looking to economic reports to help sort this all out and the list of reports this week will be especially revealing for retailers and manufacturers. We will see the Trade Balance, Retail Sales, Business Inventories and Crude Inventories, PPI, CPI, initial jobless claims, The Empire State Manufacturing Index, Capacity Utilization, Industrial Production and University of Michigan Consumer Sentiment Index.

So as the market continues to show surprising strength some investors are wondering if they are too late to join this rally or whether they should go all in. Others wonder whether it is now time to put on some shorts. I confess to a bullish outlook with an expectation for a mild pullback in the near term that will offer the opportunity to add to a few positions. Those drooping tech stocks seem worth a look at lower prices. Will they be the first to pull back and again the first to recover?