Durable Goods report - trends to watch in the Tech sector

May 31, 2009
Last Thursday the advanced Durable Goods report for April 2009 was released by the U.S. Census Bureau. I always look for clues in the report to see what is happening in the high tech industry. What does this month's report tell us?

Initially, I was pretty encouraged by the surge in semiconductor shipments in April. Shipments were up 34.4% from March. Then I plotted the data for the last couple of years in the following chart.

This chart certainly shows a significant rebound in shipments in the most recent month. Unfortunately, it doesn't yet confirm a change in trend. You could a line from the January 2008 data point to the April 2009 data point and it would pretty much result in a straight line downtrend.

A bottom in Computers?

April resulted in continued minor weakness in the Computers and Related Products category. This is the sub-sector that includes PCs, servers and various other similar hardware. The following chart shows the data for Shipments. 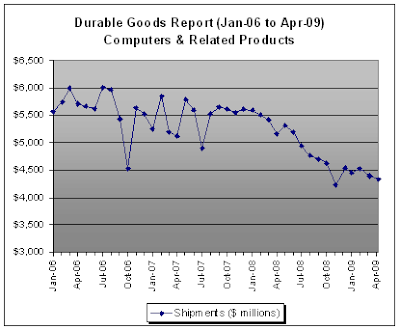 Here also we fail to see a significant change in trend though an optimist would say that a bottoming formation is in the process of developing. The declines in shipments have slowed down but, as the CEO of Dell recently said, there is no sign of an upswing in computer purchases yet. It would seem, though, that we have avoided making a new low so there is hope that better days are ahead.

Let's widen our scope now to the Computers and Related Products category which encompasses pretty much all the technology industry hardware manufacturers.

The following chart shows Unfilled Orders. The Census Bureau defines this as a measure of unfilled orders at the beginning of the period plus net new orders less net shipments. It is often thought of as an indicator of future production. Unfilled orders continue fairly flat reflecting a slump in both shipments and new orders. Nothing here stands out as a catalyst for bullishness or bearishness.

The following chart shows New Orders for the Computers and Related Products category. This is typically the number everyone focuses on. 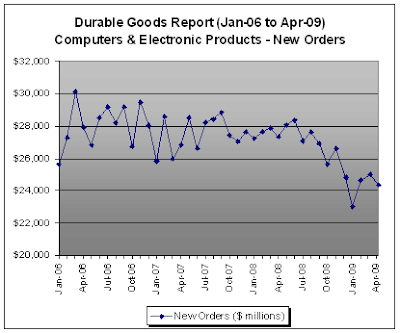 It was good to see March was revised a bit higher. It was not so good to see April come in below March. With the overall trend still down, it is disappointing to again see that we have a failure to confirm a change in trend. The good news is that we are holding well above the low established in January.

What can we say about the tech sector based on these charts? If you are a trend follower, you can't take much encouragement from these charts. All the trends are still down. It is known that the numbers in the Durable Goods report do bounce around from month to month so it would be foolish to ignore these trends.

If you are trying to predict where the tech sector goes from here, though, it is necessary to focus especially closely on the last few months. Here is where things get interesting. It appears that all of the charts above show that low points were hit three to six months ago. The data for Shipments and New Orders have since then have shown a struggle to establish a bottom. We now see a few months of what could be characterized as erratic performance but definitely no new lows.

It is safe to say the tech sector is on the mend. Tech stocks have performed strongly over the last few months in anticipation of a recovery. The data do not yet show a V-shaped recovery but they do seem to show some kind of recovery in its early stages.

If you believe in the predictive power of the markets, this is a good time to load up on tech. You'll note that IYW, the iShares Tech ETF, is approaching its recent high, it is solidly above its 200-day moving average and its 50-day MA has just crossed above its 200-day MA. All pretty bullish signs. Let's just hope stocks haven't gotten too far ahead of themselves.