September 07, 2008
A short but volatile week ends with a question mark.

For most of the week the bears were in control. Thursday saw rampant pessimism drive the Dow down 344 points. Earnings warnings from a couple of tech stocks, a dismal picture painted by the Fed Beige book, lackluster retail sales numbers and rumors of hedge funds in trouble all conspired to take the major averages back into bear market territory.

Friday started out looking like more of the same. The Non-Farm Payrolls report came out in the morning with a decline of 84,000 jobs. The unemployment rate spiked up to 6.1%. Predictably, markets sold off on the news. Mid-day, however, rumors that KKR and Blackstone were interested in buying pieces of Lehman started stocks moving upward. This was followed by talk of an impending federal government bail-out of Fannie Mae and Freddie Mac.

By the end of the day on Friday, stocks had more or less recouped the day's losses, led by a rally in bank stocks. The Dow and the S&P 500 managed to finish in the green while the NASDAQ ended with only a modest loss. Over the course of the weekend, details indeed emerged describing the the government's actions with regard to Fannie and Freddie and proving the rumors true.

The question mark in my mind: will news of the government "conservatorship" of Fannie and Freddie be enough to overcome the negative economic reports that seem to presage a weak close to 2008?

Fundamentals and sentiment are, of course, what drives the market yet it is useful to review the technical situation. Each week our Alert HQ process scans over 7200 stocks and ETFs and records their technical characteristics. The following chart based on daily data summarizes the state of our technical indicators: 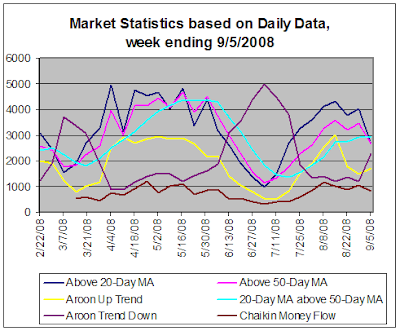 Our Chaikin Money Flow analysis shows the number of stocks exhibiting strong buying pressure has been trending down for several weeks now and is at the lowest level we have seen in the last month and a half.

In the chart below based on weekly data, we see the same kinds of moves only somewhat more subdued. 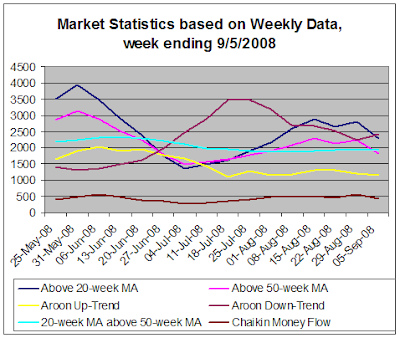 Below we present our sector analysis for the S&P 500. We have looked at three characteristics: 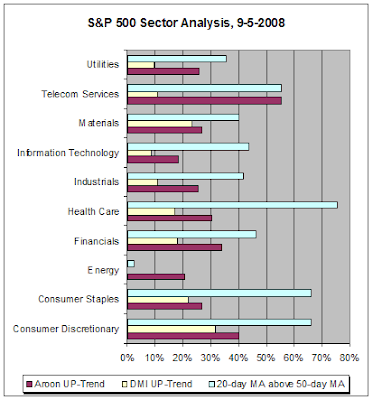 This week's notable developments consist of the continued deterioration in the Energy sector, a bit of a slide in Tech, an improvement in Financials and Consumer Staples and, most perplexing (to me, at least), a significant advance in the technical situation in the Consumer Discretionary sector.

The last couple of weeks have provided economics reports that zigged and zagged all over the place. First, it seemed like manufacturing was doing well based on exports. Now it looks like a strengthening dollar and weakening global economy may start to tone down the optimism over manufacturing. On the other hand, that strengthening dollar combined with falling commodity prices is expected to make the life of the U.S. consumer somewhat easier.

This week's reports were dominated by employment and unemployment. The news was clearly bad and suddenly, the consumer is encountering a new headwind. Falling prices don't help much if you've lost your job. The other negative was continuing weakness in Technology. With Corning (GLW) warning, it begins to look like consumer electronics may not be the safe haven many investors thought. Of course, the recent durable goods report gave some hints that that would be the case.

Finally, we come to the Financials. After helping take the market down earlier in the week, the sector helped the market recover some of its losses. In my opinion, the optimism was overdone with regard to KKR and Blackstone picking the meat off the bones of Lehman Bros. Why that should be a catalyst for a rally I can't imagine.

As mentioned above, the question is how the market deals with the government's involvement in Fannie and Freddie. To me, it seems that this action might help the real estate market avoid further serious deterioration but it will not do much to work through the overhang of excess inventory in the residential market. I would be surprised if it did much to encourage banks to lower mortgage interest rates. In addition, I don't see how it would help prop up home prices or reduce the rate of foreclosures. Primarily, it seems like a financial maneuver to ensure the capital structure of the these GSE's is adequate from an accounting standpoint - important but not necessarily a sign real estate has recovered and banks have no more problems. Interestingly, it does seem that each time the Dow or the S&P 500 gets down to around the current level, the Fed or the Treasury steps in and does something big. Are those conspiracy theories correct about the government always being ready to save their buddies on Wall Street?

So, will investors embrace a pessimistic outlook based on recent economic reports or will they decide the coast is clear and bid up stocks? As I write this Sunday night, Asian stocks are rallying and S&P 500 futures are up over 2%. The apparent feeling is that some uncertainty has been removed and perhaps things won't get any worse. In a few days, after the euphoria wears off, it will be interesting to see if the markets in general and the financials in particular are still so positive.