Another industry in transformation?

September 30, 2008
It is well publicized that the financial industry is undergoing cataclysmic changes in terms of survival of companies, industry leadership, etc. Is there is another industry that is undergoing a similar transformation?

iSuppli, the market research firm, thinks so. They recently released a report indicating that major changes have been taking place in the semiconductor industry. Granted that the changes have been quieter and less dramatic.

They begin by saying that over time semiconductor industry profitably has shrunk. They point to a downtrend in margins and provide the following graph: 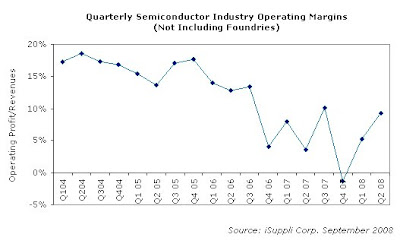 The surprising quote from the article, written byDerek Lidow, president and chief executive officer of iSuppli, is as follows:

The report goes on to describe how, in the view of iSuppli, the semiconductor industry has changed. Previously, there were three categories of companies: the dominant companies whose growth outperformed the market, the middle tier consisting of most suppliers and the lower tier of low performers.

Now, according to iSuppli, we see the result of years of predatory take-overs to secure market share combined with failures of the weakest players. What is left is essentially a two tier system consisting of a group of top-performers and another group that includes pretty much everybody else. The result of the changes in the industry, as Mr. Lidow of iSuppli describes them, can be quantified as follows:

Their take is that n0w that the industry has been transformed, one of the favored ways of attaining dominance, via buying market share, is not working anymore.

Another strategy is to milk established cash-cow products in the industry. Companies pursuing this approach include Microchip (MCHP), Diodes Inc. (DIOD), Microsemi (MSCC) and Rohm.

A third strategy, whose use is limited to the dominant players, is to out-spend competitors in product development and in developing manufacturing efficiency and scale. Companies who have used this approach include Samsung, Intel (INTC) and Taiwan Semiconductor Manufacturing (TSM).

With semiconductors increasingly becoming a commodity, iSuppli believes that it will soon begin to make sense for growing firms to pursue a strategy of continuous acquisitions to build a companies with great depth, large portfolios of products and the scale to deliver top quality technology with best in breed sales and marketing.

iSuppli seems to be saying that the semiconductor industry is consolidating, profit margins are shrinking and there is no turning back. I'm not sure I totally agree with this analysis.

With the advent of the fab-less semiconductor company, it is easier than ever for small players to enter the industry. The history of the hi-tech industry has many examples of small companies developing unexpected, disruptive products that changed the balance of power in the industry. Granted it is harder than it used to be but I don't think that tradition is dead yet.

What do you think? Will semiconductors go the way of the PC industry?

Anonymous said…
all the industries are in personal transformation era.
October 5, 2008 at 7:23:00 AM EDT