This has been yet another week of wild action in the markets. This week's financial victim was Washington Mutual. It's getting so that we don't even flinch any more when titans of the industry collapse. Congress also did its part to keep investors on edge, managing to disagree amongst themselves as well as with the administration.

Markets attempted to rally in the latter part of the week as it seemed that the dissolution of WaMu was handled in an orderly manner and the politicians began to seek points of consensus. Still, it was too little too late with all the major averages declining significantly: a 2.2% loss on the Dow, a 3.3% loss on the S&P 500 and big 6.5% declines on both the S&P Midcap 400 and the Russell 2000.

With respect to fundamentals, there were terrible numbers related to home sales, durable goods and jobless claims. Even as it looks like the bank bailout may allow us to dodge a bullet in the credit markets, it appears that a weakening economy may indeed be tipping us into recession.

Each week our Alert HQ process scans over 7200 stocks and ETFs and records their technical characteristics. The following chart based on daily data summarizes the state of our technical indicators: 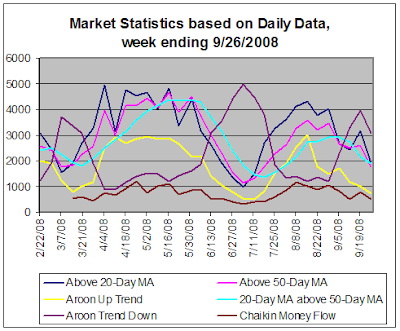 As for the trend indicators, we get a split decision this week. We use Aroon analysis to generate our trending statistics. This week actually saw a decrease in the number of stocks in strong down-trends but unfortunately the number of stocks exhibiting strong up-trends fell yet again and is now under 1000.

We use Chaikin Money Flow to track buying and selling pressure. This week's downturn in this indicator more than erased last week's nice uptick in the number of stocks exhibiting strong buying pressure.

I don't always display the chart that is based on weekly data. The curves are typically slow moving and don't show much. After the last few weeks, however, we are starting to get some real action on the chart. 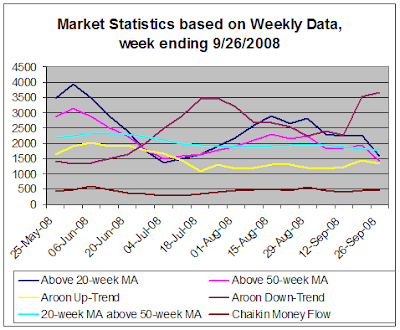 Another chart that I don't always show is the following S&P 500 sector analysis. There is often little change from week to week. This time, however, there is clear weakening in most sectors. Exceptions are Financials and Consumer Staples. Consumer Discretionary has been stubbornly showing strength but this week we can see a marked deterioration in the DMI and Aroon trend analysis for this sector. Tech, Telecom, Industrials and Energy are noticeably down. 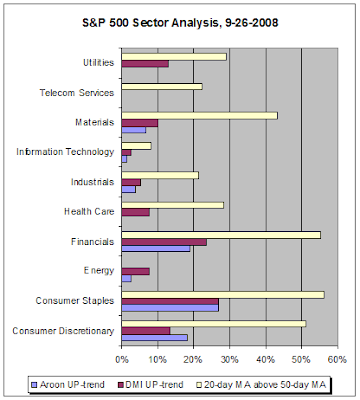 With a bank bailout imminent and a ban on short-selling in place, we can probably expect to see further strength in financial stocks. What about the rest of the market?

The economic environment continues to be murky and credit markets are still tight. This is despite the fact that some kind of bailout has been a certainty since the idea was first announced. A relief rally would be expected when the bailout bill is signed into law. But can the rally hold? Investors will soon have turn their attention to the fundamentals of this market and it is not clear that those fundamentals support higher stock prices.

And what about Wachovia? Will it be the next tune on our hit parade? We shall see...

Anonymous said…
Excellent content - as you always provide and inspires me to come again and again. You are on my RSS reader now so I can read more from you down the road.
By the way, there is one more valuable resource I’d like to share with others readers. It’s called Secrets of Successful Traders that teaches you…

• Recently, I reviewed a very unique stock trading company that has helped thousands of people to make money from the stock market- safely, easily and consistently...

and, for a small fee, they are willing to show you exactly how they did it.
For more info & special discount, visit: http://www.2stocktrading.com/discount.html