September 29, 2008
The ProShares UltraShort Financial ETF (SKF) had a big day today as the market plunged. The ETF didn't do a bad job of tracking the double inverse of its underlying index, the Dow Jones U.S. Financials Index.

It is appropriate to contrast the performance of SKF with the performance of IYF, the iShares Financial ETF which also uses the DJ Financials index as its underlying. Today IYF fell more than 9% and SKF gained less than 19%. The two ETFs seemed to track each other pretty well.

Short selling ban having an effect?

As you may know, when the SEC instituted the ban on short sales of financial stocks on September 18, ProShares made a decision to stop creating new shares of SKF. The company explained it on their web site as follows:

"...we thought there was the potential for extraordinary demand to create new shares of these ETFs. We were concerned there might be limitations in getting sufficient short investment exposure to cover any new shares of SKF or SEF. So we decided it would be in the best interests of the ETFs to cease creation of new shares."

Thus far, ProShares has not announced any change in this policy.

"ProShares cannot predict whether shares will trade above, below or at their NAV. It is possible that because no new shares are currently being created, there could be a supply and demand imbalance in the secondary market for SKF and SEF shares, which may cause those ETFs to trade at a premium or discount to their indicative values..."

It is clear that they were correct in this assumption. The following chart (courtesy of ProShares) shows the distribution of times when SKF traded at a premium or discount to its Net Asset Value (NAV) in the April to June timeframe. It shows the premium/discount to be tightly clustered around the NAV, ranging between +1% to -1%. 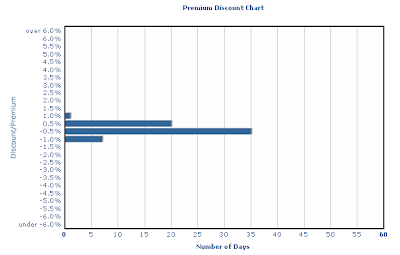 Now look at the chart for July to the present: 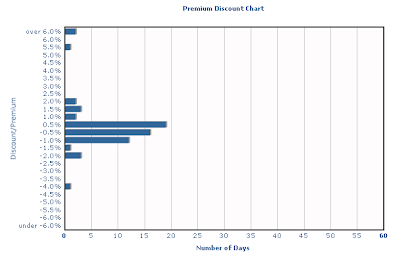 This chart shows premiums as high as 6% and discounts as low as 4%. The general distribution is still mostly clustered around the NAV but now the range has doubled from +2% to -2% and tends toward a slight discount.

What does this mean for investors?

Large temporary premiums and discounts make investing in SKF more treacherous. These differences from NAV may be manifested as wider bid/ask spreads. They may also lead to higher volatility.

On the other hand, though no new shares are being created, SKF does seem to be tracking better these days than it did immediately after the short selling ban was announced. Back then there was one day when trading was halted and afterward it seemed as if the ETF wasn't even coming close to tracking the double inverse of its underlying index.

Things seem a lot better now. If you want to bet against the financials, SKF seems to have returned pretty nearly to its old form.


PS: Interestingly, according to the Dow Jones site, the index itself fell 14%. Neither ETF seemed to track the index as well as it should have. If anyone has an idea as to why that is, please leave a comment.

Anonymous said…
The miss pricing of options has been running rampid over the past week. I'm wondering if this effects the price of the SKF.
September 30, 2008 at 1:47:00 PM EDT