Alert HQ rocket stock - Sanmina up again despite down market

September 02, 2008
For those of you have downloaded the Alert HQ BUY and SELL signals recently, you may have noticed that Sanmina-SCI Corporation (SANM) was on the alert list based on weekly data back on August 16 and again this past weekend

I have been eyeing this stock since it popped up on the list the first time. It had a beaten down share price whose recent rally generated the TradeRadar BUY signal. Apparently, many other investors are also taking notice and buying with enthusiasm. It has attracted the attention of Barron's Tech Trader Daily blog. Writer Eric Savitz had the following to say (I include the entire post as it is rather brief):
"There sure are a lot of people piling into Sanmina-SCI (SANM) shares. But there’s still no obvious reason for the move.

A I noted last week, the contract electronics manufacturer’s shares have been on an absolute tear.

To review: On July 14, the stock his a 14-year low at $1.07, and has been climbing relentlessly ever since. The initial spur for the stock was the company’s July 15 announcement that June quarter results were ahead of expectations; the actual results were reporting a week later, along with a plan for a reverse stock split. (Somewhere between 1-for-3 and 1-for-10, the company said.)

Since then, it has been off to the races. Today, the stock is up 20 cents, or 8.5%, to $2.55. In the last four days alone, the stock is up 25%. Since its bottom in July, the shares have gained 138%. One commenter on the previous post theorized that that the company might be a target for rival Flextronics (FLEX), which today happens to be off 25 cents, or 2.8%, to $8.67. That seems like a reasonable explanation for the move; whether anything is actually going on I have no idea."
The rapid ascent of SANM is clearly visible in the following chart. Note also the cross-over of the 20-day moving average over the 50-day moving average, typically a very bullish development. 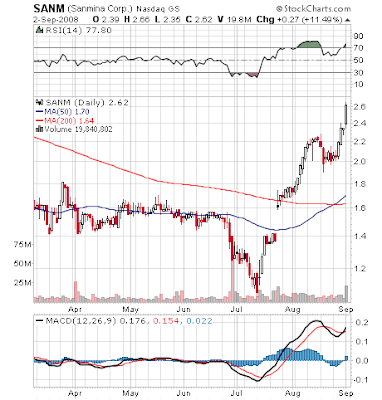 With a puny Price/Sales ratio of 0.12 and PEG ratio of 0.65, the company is sporting numbers like a value stock, not a tech stock. Despite a closing price today of only $2.62, the company is no micro-cap; its market capitalization is $1.39B. The company is now free cash flow positive. It is also nearing the end of a restructuring phase and embarking on increasing capacity in India.

The recent rally leaves SANM clearly in over-bought territory but the company would be pretty tempting on a pull-back.