July 26, 2008
If you only look at the Dow or the S&P 500, one might be tempted to say that stocks didn't do much this week. In actuality, there was a lot of movement in the broader market.

Events that moved markets this week included further drops in the price of oil, bad earnings reports from Ford and American Express and weak housing data. Many stocks are beating what are turning out to be extremely pessimistic earnings estimates. For the majority of companies, however, forward guidance has been cautious which has, in some cases, driven sell-offs.

Against this backdrop, many stocks were able to continue the momentum of the previous week's rally but red flags remain. Our technical analysis of the market follows. 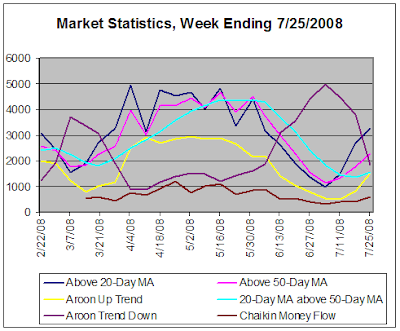 We have three weeks in a row now where the short-term moving averages have been climbing. The number of stocks above their 20-day moving average increased again though the rate of increase has slowed down. At a level of 3275, it is greatly improved but still doesn't even include half of all stocks we track.

The number of stocks above their 50-day moving average moved up and has reached a level of almost 2300, less than a third of all stocks. This metric has finally reached a level above what was registered at the March low.

The Aroon analysis we do shows stocks in strong up-trends or down-trends. This week's chart shows the number of stocks found to be in strong up-trends has increased again and has hit a level of 1500. Though better than the level at the March low, it is still less that 21% of all stocks we track.

The number of stocks determined to be in a strong down-trend, though, really decreased rapidly this week. This is the third decline we have seen since mid-May and these last two have been big ones. The number has dropped from the previous week's 52% of all stocks we examined to about 25%. According to Aroon, then, only about one quarter of the stocks in the stock market remain in strong down-trends.

We also plot the results of Chaikin Money Flow analysis. This indicator is slow moving but at least it is moving in a bullish direction. The number of stocks undergoing strong accumulation or buying has now moved up to 600. Not shown on the chart is the number of stocks shown to be undergoing strong distribution or selling. This indicator has fallen for the third week in a row and is now at 620.

We also present market statistics based on weekly data in the chart below. 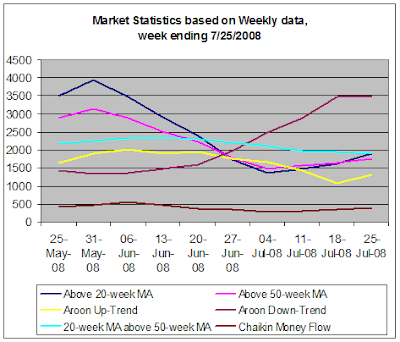 The weekly statistics, by their nature are more slow moving than the statistics based on daily data. The chart above throws some cold water on the positive tone of the daily data. When viewing the weekly data, it looks much more like the market has barely gotten up off the floor. Though some of the moving average and Aroon up-trend analysis are now positive, it is clear that a major bull market move has not yet been signaled.

The following chart of the S&P 500 shows how, despite improvement in the broad market, large caps making up this index have not made sufficient progress to even challenge the 50-day moving average. Further compounding the bearish outlook, the 50-day MA is still pointing downward and increasing its distance below the 200-day MA which is also pointing down. 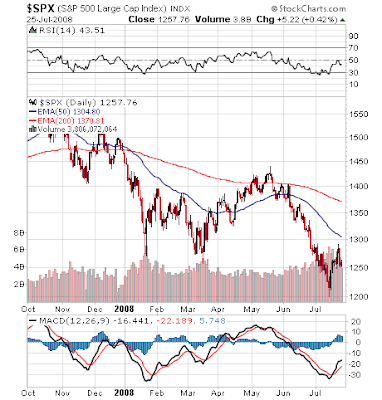 The following chart of the Russell 2000 shows that small-caps are having a much better time of it than the large-caps. As our market statistics based on daily data indicate, there is definitely some positive action going on in the broad market. We see that the Russell 2000 has crossed above its 50-day MA. The index almost challenged the 200-day MA but fell back before reaching it. Neither moving average is heading downhill as steeply as those of the S&P 500. 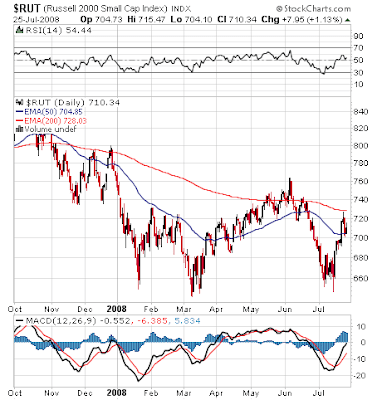 The markets are displaying a confusing number of technical indications. Short term metrics are positive (those based on daily data) but longer-term metrics show that the overall trend is still clearly bearish. Large-caps are under-performing small-caps despite the gains in big financial stocks recently. Until the indexes move above their 200-day moving averages, it is difficult to feel that the downward trend has really changed. Our data shows that even when market statistics seem quite positive, as they were in May, it may not be enough to reverse the bearish trend.

Coming up on Monday, investors will need to react to the passage of the housing bill and the failure of two more banks. Other events driving the markets this week will include jobs numbers, advance GDP, consumer confidence, auto sales (bound to be lousy), Chicago PMI, ISM index and lots more earnings reports.

Caution is still the overriding principle that should guide us through these next weeks.