July 20, 2008
This past week started off with more of the same: selling of everything and especially the financials. Wednesday, that all turned around as the market began a surprisingly strong two day rally.

Strength came from the financials in an unlikely turnaround in investor sentiment toward this downtrodden sector. On Wednesday, Wells Fargo reported earnings. Though down from the previous year's quarter, the company was nevertheless profitable and even increased their dividend. Weary investors took this as a sign that all was well with the banks and began buying financials like crazy. Added to the mix was the announcement that the SEC was prohibiting the use of naked shorts when shorting a list of selected financial stocks. Everyone held their breath waiting for Citi to report on Friday. Investors sighed with relief when Citi announced losses not as awful as had been feared.

Against this backdrop, investors decided to embrace the concept of demand destruction in the oil markets. No one wondered whether this is an admission that economic growth is slowing and consumers are strapped. In any case, oil futures tumbled to under $130 a barrel and this, too, fed the rally.

Tech stocks however turned in a mixed performance this week. In contrast to the banks, which have horrible year-over-year earnings and are congratulated when they lose a few billion dollars less than expected, several tech stocks were punished for strong growth that was slightly below analyst expectations. Google and Microsoft fall into this category. IBM and Intel, however, showed that they are weathering the economic slowdown pretty well and their stocks were rewarded accordingly.

With all this going on, the markets managed to break a six-week losing streak. From a technical analysis point of view, this week's action lit a fire under the moving averages. 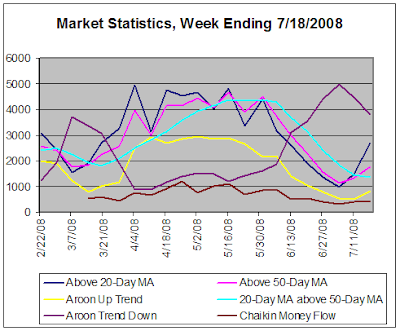 We now have two weeks in a row where the short-term moving averages have been climbing. This week showed a steep increase in the number of stocks trading above their 20-day moving average. In two weeks the number has gone from below 1000 to over 2900. After spending a few weeks below the March lows, this is heartening news for the bulls.

The number of stocks above their 50-day moving averages also moved up for the second week in a row, from 1100 two weeks ago to over 1770 now. Despite the improvement, this number remains lower than at the time of the March lows.

The number of stocks determined to be in a strong down-trend, though, decreased nicely this week, the second decline we have seen since mid-May. The number has dropped from the previous week's 62% of all stocks we examined to about 52%. According to Aroon, then, only about half the stocks in the stock market are in downtrends.

This week we also present market statistics based on weekly data in the chart below. 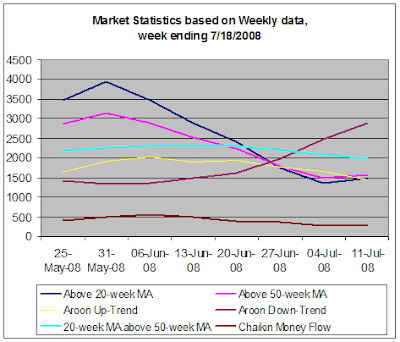 Looking at this chart, enthusiasm is more difficult to muster. Though the 20-week and 50-week moving averages are turning up, all the other indicators are flat to down, the exception being the Aroon Down-Trend indicator which continues to increase.

Though we had a powerful rally on Wall Street this week, it is not clear that the stock market is out of the woods.

From a technical point of view, the short-term moving averages are signaling a change in sentiment but most other indicators suggest maintaining a "wait and see" attitude might be the best strategy. The fact that a number of these indicators have not even managed to exceed the levels we saw during the March lows gives me pause.

Most stocks have been beaten down quite a bit and waiting to see if this rally is for real should not prevent investors from profiting over the long term. Better to wait and leave a few dollars on the table than to be too quick and loose a bundle.

For those who are looking for a quick trading opportunity, however, the set up is looking a lot like a short-term bottom has been put in place. Place your bets, folks.