July 01, 2008
Each weekend I post an overview of the short-term technical picture. As I was out of town and unable to post this past weekend, I am presenting the results of last week's trading action a couple of days late. Given the delay, I will keep things brief.

Last week's technical outcome is presented in the following chart of market statistics collected by our Alert HQ process. Each weekend we scan over 7200 stocks and ETFs looking for BUY and SELL signals. We also collect various technical information that we roll up into a chart like the one below: 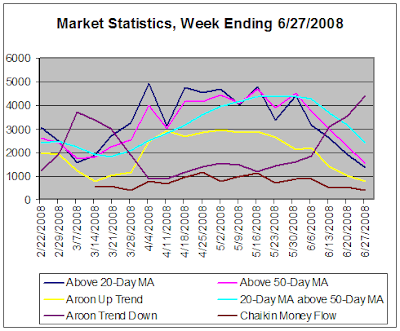 We plot six different indicators. Once again, all of them reflect weakness in the broad stock market.

The number of stocks whose 20-day moving average is still above their 50-day moving average has not dropped down to March levels yet but is rapidly approaching them. We currently have about one third of stocks still in this bullish configuration which is better than I would have expected given the data in the previous paragraph.

The Aroon analysis we do shows stocks in strong up-trends or down-trends. The chart shows the number of stocks found to be in strong up-trends dropped again last week to a level slightly below the number we registered in March. That makes five out of six weeks we have seen the number decrease. The number of stocks determined to be in a strong down-trend increased sharply this week by almost 1000 and now includes about 60% of all stocks we examined.

The chart below shows a summary for several technical indicators by sector in the S&P 500 index.

Except for energy, there is increasing weakness across all the sectors. Even Technology has taken a turn for the worse. Though tech has weakened it has still held more strength than Industrials and Materials which have declined markedly over the last few weeks.

Technically speaking, things are as bad, if not worse, than they were at the March lows. Does this mean we are about due for some kind of a rally?

As of the end of last week, our measures showed stocks heading steadily down with no signs of bottoming. This argues for continued pain as the market tries to find a solid footing from which to rally.

On the other hand, some of these numbers show that there aren't many stocks left to turn down and that those stocks that have already turned down have dropped quite a bit. This means we are in oversold territory. As previous weeks have shown, though, a market can always get even more oversold.

I have learned to restrain myself when making predictions based on the data presented here. I will limit myself now to saying that if we don't see a bounce pretty soon, the situation could turn truly ugly and the feared "second leg down" may be upon us.