July 24, 2008
"The cycle repeats viciously
While I smile outwardly"

-- Bracken Courage from the song The Cycle

When it comes to the ProShares ETFs, most of the attention is devoted to the ones that track various stock-related indexes such as the Dow, NASDAQ, S&P 500, Russell 2000 as well as a number popular sector indexes such as financials, REITs, tech, etc. Lately, the ETFs that track oil are getting some action, too.

What many individual investors may be missing is that the bond market, in particular the Treasuries, is not doing especially well. And ProShares offers a way to take advantage.

There are several reasons for the situation in the bond market.

The one that most investors are worrying about is inflation. Bonds typically decline in price as inflation increases or as the perception of impending inflation increases. This is because investors know that the typical Fed response to inflation is raising interest rates. This implies that bonds issued in the future will have higher yields than those currently being traded in the market. This expectation makes current bonds less valuable and tends to put pressure on bond prices.

Taking a long term view, interest rates, as represented by the target Fed funds rate, are currently at a fairly low level. It is not unreasonable to assume that, over time, there will be a reversion to mean; ie, rates will rise from here as part of the natural business cycle. With bond prices moving inversely to rates, this implies Treasury prices could soon hit a down-trend.

What is less often considered is the supply/demand dynamic in the Treasury market. The government is actively trying to provide support to the economy. This is taking the form of economic stimulus checks, bailouts for Fannie Mae and Freddie Mac, insuring home loans, etc. All of this takes money, lots of it, and the government raises money by selling bonds. Issuing large quantities of new bonds to support new government programs will increase supply and may well exceed demand.

To summarize the fundamental backdrop, bond prices are likely to drop due to creeping inflation, rising interest rates and a growing supply of bonds issued by the government.

Looking at the technical situation, we have the following chart of the iShares Lehman 20+ Year Treasury Bond Fund (TLT). You can see that the ETF's 50-day moving average has fallen below its 200-day moving average. The price of the ETF itself, despite a jump today, remains a penny less than the 50-day MA. This is a very "toppy" looking chart pattern. 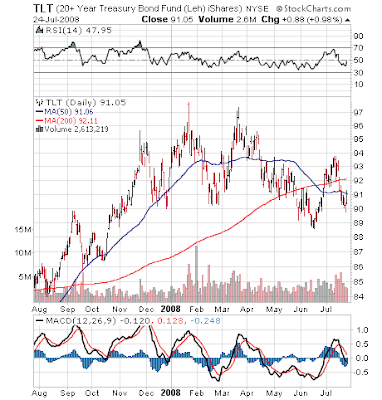 Pulling back to include the period from 2002 to the present, we have this next chart. As you can see, there is quite a bit of cyclicality in this ETF's price action. Based on this long term view, it can be assumed that TLT is coming down from a peak and soon we will be seeing the mean reversion discussed above followed, more than likely, by the continuation of the cycle down to where TLT trades below its mean value. 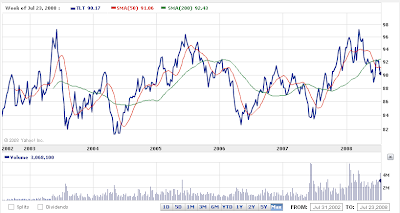 ProShares offers two ETFs that allow an investor to play this trend:
These ETFs were only introduced in May of this year so their track record is not very long; nevertheless, they are already proving to be quite popular. Both ETFs are in the top 50% of all ProShares ETFs in terms of average daily volume. (Read why this is important: ProShares ETFs - why trading volume makes a difference)

If you have read this far, you might be asking why bonds were up so strongly today if the longer term trend is down. "Flight to quality" is a term often used to describe how investors move into Treasuries when the stock market is in trouble. We have been seeing this over the last few months. Despite the perception of rising inflation, funds have poured into bonds whenever a major jolt hit the financial sector and the stock market plunged. As the stock market stabilized, the bond market weakened. Today, the stock market tumbled as investors received new evidence that real estate has not yet recovered. Keep in mind this just made PST and TBT cheaper. The cycle will repeat, get ready to ride it.