The market hesitates - too soon to call the bottom?

July 12, 2008
It was all about Fannie, Freddie and oil this past week. The major indexes dropped but we saw a small glimmer of strength in the broad market.

Financials again took it on the chin as rumors swirled about Fannie Mae and Freddie Mac facing insolvency, government bailouts, Fed intervention, etc. As the financials go, so go the Dow and the S&P 500 and to a lesser extent, the rest of the market.

Oil dropped earlier in the week only to rise to a new intra-day record after more rumors about conflict with Iran and Israel's willingness to stage a preemptive attack on Iran's nuclear facilities. Political disturbances in Nigeria also contributed to oil's resurgence. Against this background, gold also rose solidly on the week.

Tech stocks were hit by a downbeat assessment on the technology environment delivered by a Cisco's John Chambers. A positive statement from Intel only helped a little to dispel the gloom settling over tech.

In spite of all this, it was a pleasant surprise when looking at the results of our technical analysis to see that at least a few stocks rose over the course of the week. 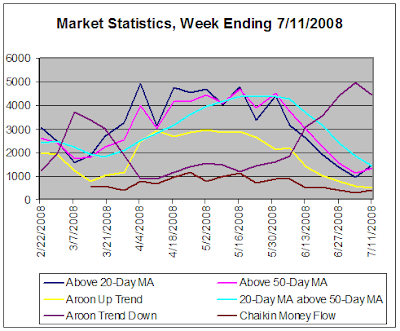 We plot six different indicators. This week, they are showing that a battered and bruised market may be taking a breather in its recent decline.

There is actually some decent news in the moving averages this week. The number of stocks trading above their 20-day moving average moved up from below 1000 to almost 1500. As welcome as this bounce is, it is still hovering at a level that is even lower than at the time of the March lows.

The number of stocks above their 50-day moving averages moved up from 1120 to just over 1300, also lower than at the time of the March lows. It is now up to 18% of the total number of stocks we evaluate and remains at a historically low value.

Despite the somewhat good news in the previous paragraphs, the number of stocks whose 20-day moving average is above their 50-day moving average continued to drop though at a slightly slower rate and has also reached a level below what we saw at the March lows.

The number of stocks determined to be in a strong down-trend, though, actually decreased this week, the first decline we have seen since mid-May. The number has dropped from the previous week's 70% of all stocks we examined to 62%.

The following chart summarizes how the various sectors that comprise the S&P 500 are performing technically.

Sectors that have shown general improvement since last week include Consumer Staples and Healthcare while Utilities are holding their own.

Tech continues to slowly wilt and is now reaching the same levels we have seen in Industrials and Materials. As always, Financials and Consumer Discretionary are bring up the rear.

The 20-day and 50-day moving averages are showing that some stocks are enjoying a bit of a bounce. Aroon shows that some downward trendlines are moderating. Chaikin Money Flow shows that selling is not as strong and widespread as it has been recently.

The S&P Sector analysis shows the defensive sectors taking the lead while former leaders like Energy begin to show weakness.

What we seem to have is a market that is hesitating. It has marched steadily downhill since peaking in May. Now we are seeing some positive signs in a few of the technical indicators. Or maybe we should say they are less negative signs.

We see some sector rotation as defensive stocks finally come into more favor. The fall of the last strong sector, Energy, might be seen as a capitulation (even good stocks are getting sold) or maybe a bet that oil is peaking. Either interpretation might lead one to believe a bottom is near. Importantly, there has been a stirring in non-financial stocks, especially among the small-caps, that actually resulted in a gain in the Russell 2000 this week.

As much as bulls want to grab onto some good news, though, the general trend for now remains decidedly down until proven otherwise.

Earnings, rumors and news and will determine the course of action. Earnings season is now upon us. Investors are clearly worried that earnings could take the markets down another notch. The news remains grim. How will investors react to the failure of IndyMac? Is this just the tip of the iceberg? What new rumors regarding Lehman, Freddie or Fannie or an unexpected company or situation will panic investors next?

In any case, we must all stay alert. It will be a busy week on the economic calendar with PPI, CPI, retail sales, Empire State Index, industrial production, crude inventories, initial claims and Fed minutes. As for earnings, we will see a good number of large and small banks reporting this week and surprises of sufficient magnitude could indeed move the market.