April 21, 2008
As I have discussed in the past, the TradeRadar analysis attempts to identify stocks that are undergoing reversals. Given my current bullish attitude, this means that we will be featuring stocks that have declined over the last six months or so and are now beginning to bounce off their lows and show some strength in their stock price.

One thing I have noticed about using the TradeRadar BUY signal is that the stock picks don't carve out a perfect V-shape when they undergo reversals. They tend to hit bottom, then move up fairly quickly, thus triggering the initial TradeRadar BUY signal. Then they tend to back off and go into a consolidation phase after which, if the reversal is meaningful, the stock moves up to new highs.

In this case, there is a good chance that a cheaper entry point can be obtained. Looking at the following chart of Allis Chalmers (ALY), for example, TradeRadar Alert HQ gave a BUY signal toward the end of February and I purchased the stock at $13.16. The stock soon fell to under $12 then began to steadily move up. A little patience would have provided an extra 5% or 6% profit. 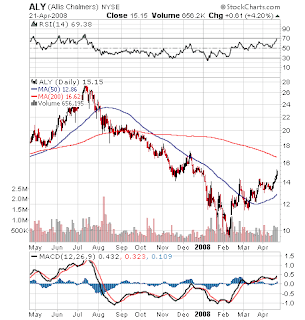 Another pattern I have seen is that a stock may move up in anticipation of earnings (and we are in the middle of earnings season, after all) thus triggering the TradeRadar BUY signal. When earnings are actually announced, though, anything less than what investors were expecting can push the stock down quickly.

In this second case, getting hit by an earnings surprise can also be avoided but the timing is trickier. If the earnings release is in the same week as the BUY signal, it can easily be argued that an investor should wait before committing. It can easily mean the difference between being stopped out at a loss or preserving capital for other investment opportunities. It pays to keep an eye on the earnings calendar.

When all is said and done, the two situations described here can be remedied by exhibiting patience. Wait and watch for a bit. If the stock deserves to rally, it eventually will.

Anonymous said…
Thank you for sharing your experience and knowledge. You have no idea how useful this is. Great website, by the way.
October 9, 2008 at 3:27:00 AM EDT