April 19, 2008
Markets jumped this week on solid results from Intel (INTC), IBM, Google (GOOG) and Caterpiller (CAT). Even the financials helped by reporting earnings that were less bad than feared.

As a result, markets are more or less back up to the top of their recent trading range. Looking below at the chart of the S&P 500 SPDR ETF (SPY), you can see that the ETF is pressing up against the same old resistance level around $140. SPY has also moved up close to its top Bollinger Band, indicating the ETF is potentially over-bought. This latest advance has been on decent volume but one worrying aspect is that volume tends to be much higher on the major declines.

Looking at other technical indicators, though, the picture is relatively bullish. You can see that MACD and Aroon are both indicating up-trends in the making. The 20-day moving average has now crossed above the 50-day moving average, creating another bullish signal. 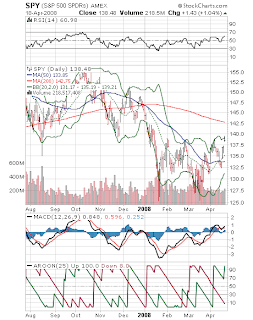 The big question, of course, is whether stocks can continue making gains. I think the answer is yes.

Looking at the market statistics we gather from the Alert HQ process, we can see in the chart below that things are looking positive for more and more stocks. After a tough week (see the data points for the week ending 4/11/08), stocks bounced back this week. 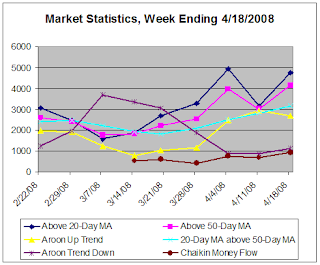 We are seeing that the Aroon indicators are not as positive as the moving average indicators. The number of stocks in an up-trend as determined by Aroon analysis has dropped somewhat and the number of stocks in a down-trend has actually moved up slightly from last week's level. Does this throw our bullish thesis in doubt? I don't think so. The Aroon calculations have a fair amount of filtering applied and, as a result, it can lag quicker indicators like the 20-day moving average.

Chaikin Money Flow is shown above for those stocks that are showing strong accumulation or buying. As you can see, the number is moving up slowly but surely. What is not shown on the chart is the number of stocks where CMF is showing strong distribution or selling. That number increased very slightly this week. Still, what we measure is strong accumulation and distribution. It may not be such a negative that strong distribution is more or less flat rather than falling. It may indicate a healthy rotation out defensive stocks and into today's leaders.

We have a good cross-section of stocks participating in the recent up-trend. As pointed out a couple of weeks ago, when breadth is this good, gains are more likely to hold.

We are early in earnings season. As long as no major bellwether stocks surprise with truly horrible results, it looks like stocks are poised to break through resistance and register new gains.

themicrokid said…
Good Analysis. I posted on by blog on 2/26 the bottom was in, but a retest was possible. I sure blew BSC though.

I will feel much better when we clear some resistance though!