Cirrus Logic was identified a couple of weeks ago in our Alert HQ market scan as a BUY. Since then it has gained well over 20%. Just take a look at the chart below. 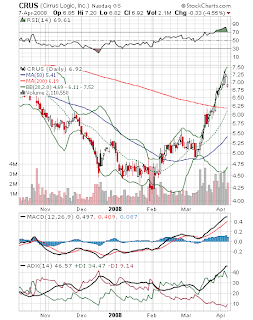 There appear to be several recent drivers for the excellent stock performance.
An SEC investigation in the company's stock option practices was concluded with no recommendations for enforcement actions.

The stock was upgraded by an analyst at Thomas Weisel Partners. The call was based on a report that Wolfson Microelectronics, a competitor of Cirrus, wasn't selected by a major customer for inclusion in the next generation of its portable media player. It is thought that the customer is Apple. The analyst is looking at this as an opportunity for Cirrus Logic to gain market share. Cirrus has already won a contract to provide chips for the iPod Classic and it probably has the inside track for the new version, as well.
All of these events transpired in March. The stock had already bottomed out and turned up by the beginning of March. In the middle of the month the stock really took off and moved up about 25%. Still, these events by themselves don't seem important enough to have pushed the stock up that much. It appears that the company is on track to start growing earnings again and that, I would submit, is the primary driver.

The picture brightens somewhat when we look at the last four sequential quarters. Revenues have been up the last two quarters, registering 14% and 4% quarter over quarter gains , respectively. Expenses have been problematical with elevated R&D and G&A costs causing operating earnings to swing negative in the most recent quarter. Nevertheless, the company posted income of $4.2 million in the most recent quarter versus a loss of $0.3 million in the previous quarter.

Over the last few quarters, the company has absorbed a number of restructuring charges and losses on sale of investments. The closing of the China subsidiary will hit the income statement for another $11 to $13 million in charges.

It is not surprising to see the stock's RSI firmly in the over-bought range given the recent run-up. Still, it is hard to see how the stock can hold on to these gains given the financial backdrop. Indeed, Monday's action saw the stock give back 4.5%. I can only assume that the flow of business from Apple is expected to turn into a tsunami.