Hard to be a bear with market internals like these

April 05, 2008
Market internals just keep on improving, regardless of the news on the economic front. This week's statistics as gathered by the Alert HQ market scan shows stocks are clearly on the road to recovery. 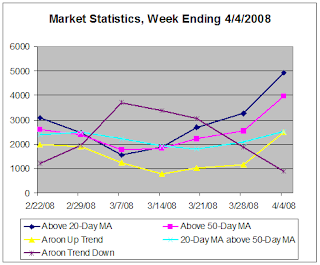 Looking at the chart above, we see all the positive indicators are now moving in the same direction - up. For most of them, this is the highest they have been in the seven weeks since I starting collecting the data.

The number of stocks above their 20-day moving average has jumped to nearly 5000, well over half of the 7200 total stocks that were scanned for this report. Stocks above their 50-day moving average have jumped to nearly 4000, a big improvement over last week and an acceleration in this indicator that had previously been trending upward at a slower rate.

Below we have the chart of the SPDR S&P 500 ETF (SPY). We see that this week we reached a level on SPY (about $138) that is just about where we saw the last peak back in late February. After that last peak, SPY sold off strongly and made a new closing low. Now that we are back at the same level, what's different? 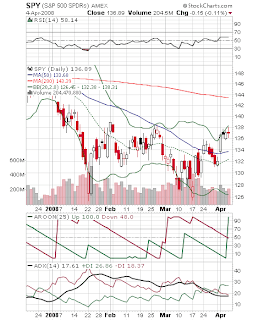 It is useful to contrast market internals for this week with the data collected the week of the February peak. In the post that I wrote at the time of the February peak, I looked at the same data and most of it was negative. The sell-off in the latter part of the week ending Feb 29, when the peak occurred, drove all of the positive indicators down. It is important to note that none of them were at high levels in that week or the week previous. Market breadth was extremely weak and there should have been no surprise that the rally faltered.

So here we are again in the middle of a rally and investors are nervously wondering if it can continue. The Alert HQ market statistics this time show stocks to be in far better shape now than they were back in February. The number of stocks in up-trends or above their moving averages shows that many more stocks are participating in the rally this time. In February, it was only a select few that pulled the indexes up.

Another difference between February and now lies in the impact of economic news on market sentiment. In the week ending February 29, we had bad news from the Chicago PMI, PPI showed signs of inflation, consumer confidence plunged and consumer spending was reported to be flat. This week we had more big bank write-downs, Bernanke suggested a recession is possible, weekly initial claims exceeded expectations and non-farm payrolls declined more than expected. Normally, this kind of awful news would have sent markets into a tailspin. This week investors stood firm and the indexes held very nearly all their gains.

So, have we seen the bottom and should investors rush out and buy SPY? From the limited data available, it is clear that market internals are stronger than they have been in quite a while. It is too early to say whether we have seen the bottom but there is reason to be optimistic about the current rally. That being said, there are still challenges ahead.

Using SPY as a proxy for the market in general, the chart above shows that we have been here before. We see we are still below a resistance level at $139-$140. We are again at the upper limit of the Bollinger bands. Both will test this rally.

So many stocks have jumped this week that it wouldn't surprise me to see a pullback or some kind of consolidation. We are not far from earnings season and the "event risk" of unexpected bad earnings reports from various industry bellwethers could also knock the markets back. And there may still be some landmines left in the financial sector.

Market internals argue for continued strength but charts argue for caution. The market is healthier than it has been in weeks and I believe the benefit of the doubt should be given to the bulls.