Market internals converge - what does it mean?

April 13, 2008
Last week's market statistics led me to comment that it is hard to be a bear with market internals looking pretty good. I still had, and have, a few of the ProShares ultra short funds in my trading portfolio. This week's statistics as gathered by Alert HQ market scan show some weakness returning to stocks.

The week's numbers in review --

Each week, we scan about 7200 stocks and ETFs to generate our statistics and alert lists. This week, I am struck by the convergence of indicators right around the 3000 mark. Is it a coincidence or is there something meaningful here? 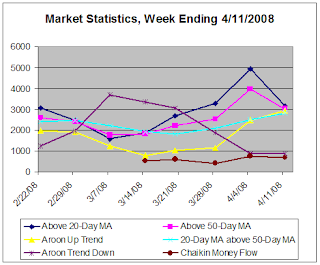 In the chart above, we see that this week the indicators are starting to diverge. Last week all the positive indicators were moving up in unison. This week we see the fastest moving indicators reflecting drooping stock prices earlier in the week and the more pronounced sell-off on Friday.

We have added Chaikin Money Flow as an indicator to the chart this week now that we have enough data points to identify whether a trend may be developing. Our scan looks for stocks or ETFs showing reasonably strong accumulation. As can be seen in the chart, the number in that category is still small though it is slowly increasing.

So where does this leave us and how does it relate to the major stock indexes? As we did last week, we'll look at the SPDR S&P 500 ETF (SPY) and see if we can draw some conclusions. 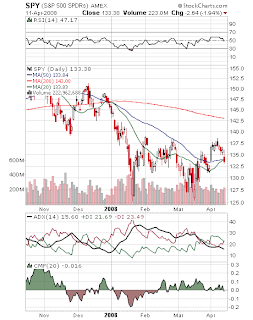 Other technical concerns related to SPY include a bearish development in the DMI, where -DI just crossed above +DI. Chaikin Money flow has actually turned negative this week, indicating distribution has started.

Two weeks ago the economic reports were uniformly bad and the markets held their ground. This past week, there wasn't all that much important economic news but earnings season got off to a bad start with Alcoa (AA), UPS and especially General Electric (GE) taking the entire market down including SPY which lost about 2.7%. To see 2000 stocks fall below their 20-day MA while the S&P loses only 2.7% is definitely disconcerting.

So this week, market breadth has deteriorated but is still equal to or better than it has been in weeks. It is alarming, though, to have seen so many stocks fall below their 20-day moving averages so quickly. Apparently, many stocks had been barely hanging in above the 20-day MA and it took just one tough week to push them down below that level again. It also seems to me to be an indication of how skittish investors remain these days.

One positive we can point to, however, is the fact that the number of stocks with the 20-day MA above the 50-day MA is increasing. This indicates that strong stocks continue to be rewarded. Many other stocks, however, seem to have merely risen along with the market in general and as soon as the selling began, investors abandoned these stocks. I believe this is what's behind the 2000 stocks that dropped below their 20-day moving averages this week. The sheer size of this number indicates that both weak stocks and mediocre stocks are having trouble finding buyers.

So I remain cautiously hopeful. As earnings season progresses we will undoubtedly see offending stocks sold off strongly. If the breadth we have built up so far continues to hold, though, there is a good chance that profitable stocks will hang onto gains. In other words, my expectation is the entire market will not plunge to new lows.

Oh, and what about the convergence of all these indicators? A numerical anomaly that indicates we are at a crossroads. But then the market always seems to be at a crossroads lately, doesn't it?