April 27, 2008
Markets held steady this past week. Given the big finish on Friday of the previous week, the fact that stocks held their gains without succumbing to profit taking is an indication of wide participation and solid investor sentiment.

The bad news of the week consisted of record high oil prices, Microsoft (MSFT) coming out with lackluster earnings and guidance and Ambac (ABK) coming out with downright horrible earnings. The fact that investors did not let these items derail the current rally shows how much strength the rally still has.

This is not to say, however, that everything is sunshine and roses. The Alert HQ market scan process has provided some sobering information. Each week, using the Alert HQ software, we scan over 7200 stocks and ETFs to see how they are doing with respect to various technical indicators. The results are summarized in the chart below. 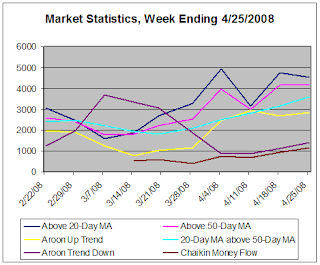 More importantly, the number of stocks whose 20-day MA has made a bullish cross-over above their 50-day MA continues to increase at a nice steady rate. Every week it seems another 300 or 400 stocks move into this category. To me, this is an indication that the market is in the process of making a real change from a bearish bias to a bullish bias.

Other Indicators -- a mixed picture

Two other indicators we measure are Aroon and Chaikin Money Flow. Aroon shows that the number of stocks in a strong up-trend has continued to increase; however, it also shows that the number of stocks falling into a strong down-trend has increased for two weeks now. I am hoping that the increase in stocks in a down-trend is the result of those stocks who missed earnings. Since we are in the middle of earnings season, it is possible that what we are seeing is the effect of positive and negative earnings and earnings expectations and how they are beginning to be reflected in this indicator.

The Chaikin Money Flow indicator identifies stocks that are undergoing strong accumulation or buying. We see this indicator is also steadily moving upward. Not show on the chart is the number of stocks that are undergoing strong distribution or selling. This number has been pretty much flat for three weeks now. The bias here seems to be on the buy side.

Bullish bias remains -- what could hold us back?

The round up of technical indicators discussed above paints a relatively bullish picture of market action. Some of the indicators whose performances are moderating, though, show that the market is perhaps slowing its ascent. What's going on?

There are two factors at work. First is earnings. This was supposed to be a disastrous quarter, reflecting a recession, soaring commodity prices, a weakened consumer and the ongoing credit crunch. What we are seeing so far, however, is that earnings are generally somewhere in the vicinity of "OK". For the most part, it is only the financial stocks and the airlines that are truly turning in awful earnings. Guidance from most companies has been cautious and why wouldn't it be in today's environment? So earnings not being as bad as investors had feared is a positive for this market.

The second factor is the technical setup. Looking at the SPDR S&P 500 ETF (SPY) in the chart below, we can see that we are at a point where a number of indicators all come into play. 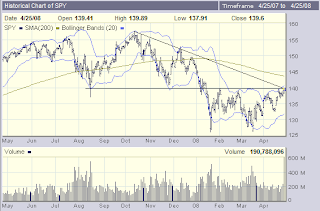 We are up against the long-standing resistance at about $140. SPY has failed to break through this resistance several times already. We are up against the downward sloping trend line established back at the October high. We are at the top of the Bollinger Band range, indicating SPY is over-bought. Finally, SPY is just a few points away from its 200-day moving average which is still sloping downward.

It will be a real challenge for markets in general and SPY in particular to break upward through the resistance presented by these multiple indicators. The other major indexes are in more or less the same condition.

The bullish bias inherent in the market statistics we are collecting leads me to be hopeful. We are seeing a general firming in stock prices across the board. A little patience and no major earnings disappointments from bellwether stocks and we just might see stocks break out and begin a significant move up.