After running Thursday night's Alert HQ process, I have a stock that is on both of these lists and is also passing the screen for Reasonable Value. This company is RLI Corporation (RLI). Here is the chart : 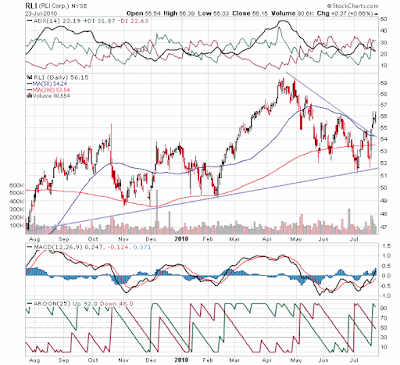 I've drawn two trend lines in blue: a longer term trend that is sloping upward and which RLI seems to be following and a shorter-term downward sloping trend that the stock has broken through to the upside. The fact that RLI has burst upward out of the wedge formed by the two trend lines is another positive which suggests the stock could hit $59 before too long. All in all, pretty bullish performance.

Why is RLI considered Reasonable Value?

Here are my criteria for the Reasonable Value screen:
Here are the stats on the company:


RLI meets all the Reasonable Value criteria, with room to spare.

The company beat earnings estimates earlier this week which allowed the stock to continue its upswing. RLI reported blow-out second-quarter 2010 operating earnings of $1.52 per share, beating the Zacks Consensus Estimate of $1.05 per share by 47 cents. These results also compare favorably with operating earnings of $1.32 per share in the year-ago period. Some of this quarter's earnings gain, however, came from reversing reserves set aside during prior years (the same trick the banks are playing this earnings season) but there were also organic gains from increased premiums and investment income. Underwriting income was $30.8 million, up 22.8% year over year, led by an increase in Property and Surety underwriting income, partially offset by a decline again in Casualty underwriting

A measure of profitability used by insurance companies to indicate how well they are performing in daily operations is the Combined Ratio. A ratio below 100% indicates that the company is making underwriting profit while a ratio above 100% means that it is paying out more money in claims than it is receiving from premiums. For RLI, combined ratio for the quarter improved 480 basis points year over year to 74.7% driven by an improvement in Casualty and Surety combined ratios, partially offset by decline in the Property combined ratio.

Because the growth picture is somewhat murky with the Casualty segment lagging in underwriting and the Property segment's combined ratio failing to improve, Zacks maintains a Neutral rating on the stock. Similarly, Stifel Nicholaus has upgraded the stock but only from SELL to HOLD.

RLI is a value stock with a growth stock chart. Caveats are that it is not unusual for financial stocks to pass the Reasonable Value screen and the company is seeing uneven results in two of the three segments in which it operates. On the other hand, the company is solidly profitable, raises its dividend on a regular basis and has been able to reduce costs year over year. I'm not an expert in analyzing insurance companies but the stock could be worth a trade.