July 11, 2010
The market turned on a dime this week. Pundits struggled to find a decent reason. An increase in the IMF's GDP forecast for 2010 was modest, a drop in weekly jobless claims was welcome but still modest, retail sales reports for June were mixed (though industry experts say June is generally weak so don't worry about it) and ISM Services were actually slightly lower that expected. Nevertheless, the herd swung into buying mode and stocks jumped 5%.

The debate now switches to whether the bull is back or whether this is just a flash in the pan rally,soon to be forgotten. The blogosphere naturally provides both sides of the argument. Well known investor and hedge fund manager Doug Kass declared we have seen the bottom for 2010 and it's upward from here. On the other hand, we have people discussing the possibility of Elliot Wave theorist Robert Prechter's call for Dow 1000. No doubt things will end up somewhere in the middle.

In the meantime, let's look at where we are today. The data for the following charts is generated from our weekly Alert HQ process. We scan roughly 6040 stocks and ETFs each weekend and gather the statistics presented below. 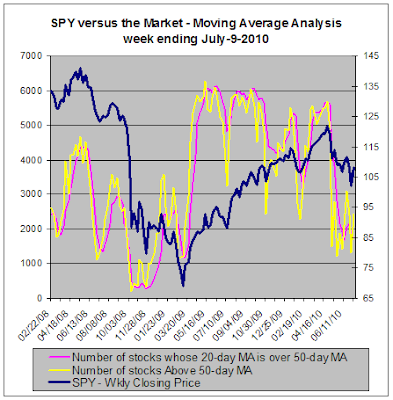 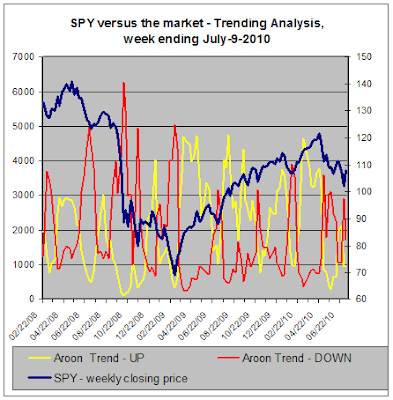 As for the stock signals at Alert HQ, the signs are very encouraging. Out of 94 Trend Busters, there was only one SELL signal. There were 220 Swing Signals, an usually high number, and every single one was a BUY signal. These are the stocks that have been first to break out and I encourage you to take a look.

It's all about earnings. This coming week is considered the start of second quarter earnings season with Alcoa (AA) reporting on after the close on Monday. Other big names bellwethers include Intel (INTC), JPMorgan Chase (JPM), Google (GOOG), Bank of America (BAC), Citigroup (C), and General Electric (GE). Results are generally expected to be good as year ago comparisons are relatively easy. Investors, worrying about a slowdown in the second half of this year, will be paying the most attention to forward guidance. Management statements will be analyzed with a fine tooth comb.

In addition to earnings season, there is a pretty big slate of economic reports to be released this coming week. We will see more retail sales reports, export/import prices, business inventories and minutes from the last Fed Open Market Committee meeting. Thursday is a big day with initial jobless claims, continuing claims, Empire State manufacturing index, industrial production, capacity utilization and the Philadelphia Fed manufacturing index. Finally, on Friday we get CPI and the Michigan Consumer Sentiment survey.

With earnings and data coming at us in mass quantities, perhaps the market will finally begin to be ruled by fundamentals rather than fear and computers. At least that's my hope. In any case, there's lots going on this coming week so hold on to your hats.

TradeRadarOperator said…
No, I don't. The program just counts them as it goes along. Sounds like a good addition, though. Stay tuned; maybe I can pull it together in the next few weeks.
July 11, 2010 at 10:10:00 PM EDT