July 30, 2010
The advanced report for Durable Goods for June was released Wednesday and it contributed to a drop in the market that day. Indeed, headline numbers were disappointing (especially since this is supposed to be a manufacturing led recovery):
Since I usually focus on the tech sector, that last bullet point was rather alarming. Let's look at the charts and put that data point in context.

Many analysts give less importance to Shipments since this is a backward looking measure reflecting orders that have been confirmed, manufactured and shipped. In other words, ancient history. The following chart shows how June shipments look for the overall tech sector: 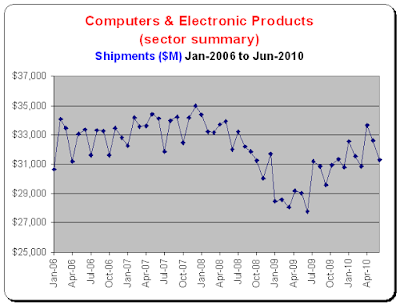 That big decrease mentioned above is clearly visible in the last data point. It's a little surprising that, despite the drop in shipments, so many tech companies are showing improved earnings and are beating earnings expectations anyway.

The forward looking measure that Wall Street gives the most credence to is the New Orders number. The following chart shows New Orders for the tech sector: 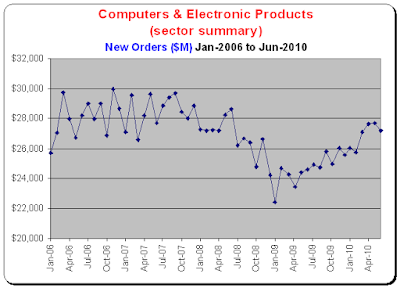 New Orders show a decline back to levels last seen in March of this year.


First of all, there were a couple of positives in this month's Durable Goods report
So we now have two months of declining shipments in the tech sector which more or less continues the pattern that has been in place for the last year. This most recent decline was sizable, however, and it makes the upcoming July numbers all the more important. Without an increase in July, the tech sector may be facing a change in trend - to the downside.

Luckily, the back-to-school shopping season is coming soon and that will provide increased demand for consumer technology products and the associated components that go into them. Back-to-school is of course followed by the holiday shopping season. So the seasonality is in favor of supporting demand for tech.

So for now, I have to say the trend for the tech sector remains up but the next couple of months will be crucial. Tech could be at a tipping point.