After being wrong for two weeks, am I finally seeing the glimmer of a bottom?

July 01, 2010
This is a quick post announce that the Thursday Alert HQ signals are available. Predictably, SELL signals predominate. After two weeks of nearly non-stop selling that is no surprise.

What is a surprise is that the Swing Signals list is nearly all BUY signals. There are only 20 Swing Signals today but only one is a SELL signal. A preponderance of BUY signals generally suggests that the market is ready to turn up.

Should we trust this indication and bet on an upturn? Nineteen BUY signals comprise a shaky foundation for expectations for a rally. After all, today the market was merely less bad so these 19 stocks are a pretty small percentage of the 6000 or so stocks that we evaluated at Alert HQ tonight.

Given that we look at so many stocks at Alert HQ I thought I'd show a chart of the Russell 3000 which can be used as an approximation of the whole stock market. 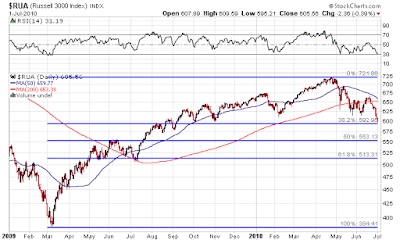 So many analyses have focused on the emerging head and shoulders pattern and various support levels. In contrast, this chart shows the Fibonacci retracement lines.

You can see that RUA has dropped down to the first retracement line. Essentially, this represents a pullback of almost 18%. We could indeed see a bounce at this point but a failure to resume the up-trend would portend a drop to the 50% retracement line. That would be equivalent to a 23% drop from the peak in absolute terms. In other words, definite bear market territory.

Times that test self confidence --

I've been convinced that fundamentals have been slowly improving. What is apparent is that this improvement will not proceed in a straight line. The V-shaped recovery has always been an unlikely scenario after such a severe shock to the global economy. Things like the ISM index are still solidly above 50 which shows growth, company guidance is mostly optimistic (remember, earnings season is about to start) while the jobs and housing pictures remain gloomy. All in all, a muddled situation but not a doomsday scenario.

Be that as it may, the market has adopted total pessimism and has continued to sell off, regardless of any positive signs in economic reports. As I kept predicting the market was about to recover, it did the opposite. The fact that I have been dead wrong on the direction of the market these last two weeks makes it hard for me to be confident that a bounce is on the way now. Nevertheless, just when you throw in the towel is often when markets turn around. Keep an open mind and keep an eye on those company earnings. Stocks are much cheaper and this may turn out to be another buying opportunity like back in February.