July 04, 2010
After running Saturday morning's Alert HQ process I checked my "Reasonable Value" screen against the day's Trend Busters and Trend Leaders. For those of you who have not see one of my previous "Reasonable Value" posts, here are the criteria for the screen:
Today there is just one stock that passes this screen and it's from the Trend Busters list. The company is CF Industries Holdings (CF). The following chart shows why the stock is a Trend Buster: 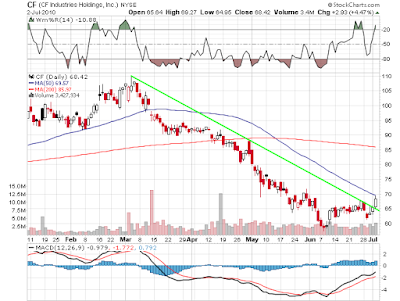 On Friday, the stock popped up above the bearish trend line (in green). It now sits just below its 50-day moving average. From a technical analysis point of view, the bullish breakout over the downward trend line is a positive but buyers would need to have confirmation by seeing.the stock move above that 50-DMA. Supporting the bullish case, MACD and Williams %R show a change in trend to the upside is in the making. This is further supported by Slow Stochastics (not shown above).

OK, now we know why CF is a Trend Buster. Let's look at why the company passes the "reasonable value" screen.

First of all, CF Industries is basically a producer of fertilizer, primarily nitrogen and phosphates. The company has a market cap of $4.6 billion, a trailing PE of 11 and a forward PE of less than 9. PEG is a mere 0.57 and the Enterprise Value / EBITDA ratio is less than 5. The Price-to-Sales ratio is 1.9 and Debt-to-Equity is nearly zero. All these measures suggest deep value.

I mentioned above that the company has a market cap of $4.6 billion. You might be interested to know that they are holding over $1 billion in cash. In addition, they pay an annual dividend of $0.60.

There's more good news from the point of view of fundamental analysis. Take a look at some of the measures calculated by my Trade-Radar software:
All this points to a company that is financially quite sound and qualifies to be considered as a value stock. So why did the stock take such a hit before its recent upturn? The following chart from Google Finance has the answer: 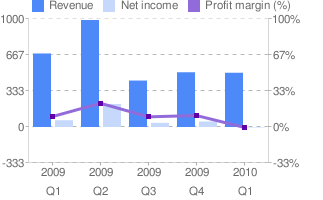 The company has struggled during the economic downturn as demand and prices declined. Revenue, earnings and margins are all down. You may remember some of the high flying potash producer stocks from 2006 and 2007 that have since crashed. CF is not a potash producer, focusing as I mentioned above on nitrogen and phosphates, but its stock price followed the same trajectory. Driven by the big move into ethanol, planting of corn skyrocketed and the need for fertilizer followed. The growth in the market for ethanol has since slowed.

Back in June, the Department of Agriculture provided a bullish report on corn and soybeans. This is a positive for the fertilizer stocks because corn requires more kinds of fertilizer than many other crops. CF and others popped on the news.

Here are a few other items that suggest the recovery is real for CF.

Management's outlook during the first quarter conference call was bullish. They pointed to low costs for natural gas that conferred advantages for their nitrogen business and added they were exporting nitrogen-based fertilizers to Australia, Mexico and Chile. This is notable as their primary market is in the U.S. The negative aspect of first quarter results was the result of downward pressure on prices in both segments of the company's business.

Looking ahead, management points to reasonable prices for natural gas, increased corn planting, beneficial planting conditions and better expectations for the nitrogen business due to a pick-up in ammonia sales in April and even price increases in the ammonia business. The effects of ethanol are still being felt in the industry.Though the ramp up is not as extreme as in 2006 and 2007, ethanol production continues to slowly increase. This results in more corn planting and growing demand for fertilizer. Corn prices also seem to be in a range that are optimal for the fertilizer companies, encouraging farmers to plant corn and supporting fertilizer company margins.

CF Industries recently acquired Terra Nitrogen Company and the acquisition seems to be proceeding well with nitrogen sales in the first quarter coming in above expectations. Indeed, Terra reported improved net income despite falling prices. The combination of the two companies is also expected to yield efficiencies that will result in cost reductions.

Broadpoint AmTech reiterated a Buy rating on CF Industries on June 15, noting that "patient investors should take advantage of the pullback in fertilizer stocks." Nice call as the stock price more or less began its recovery around that time. Among others, hedge fund Passport Capital also maintains a position in CF.

If things play out as well as management projects, CF's stock price should continue the breakout that we see happening this week. Considering that the stock is well within the value range, any downside should be limited. If you are a value investor, CF appears to be an excellent candidate. If you subscribe to technical analysis, CF appears to show great potential in this case, as well. This is one stock that deserves a place on your watch list.