Semiconductor turnaround - is the correction over already?

November 05, 2009
On Monday I asked if semiconductors were a bargain yet. I proposed that very soon they would be and then the sector would be a clear Buy.

Quite frankly, the sector didn't quite fall as far as I thought it would and now today, in the midst of a tech resurgence based on Cisco's better than expected results, semiconductors appear to running again.

The following chart exhibits several aspects of technical analysis that are worth reviewing: 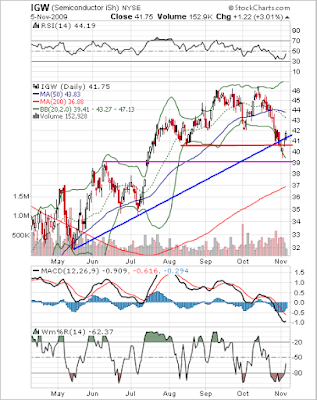 Here we see the iShares Semiconductor ETF (IGW). There are five points to observe:

After a 15% drop from its peak, this ETF certainly endured more than a correction. Seeing the range of the Bollinger Bands and the slope of the 200-DMA, however, I'll go out on a limb and predict that IGW should be able to achieve a 12% to 20% gain before the next serious pullback.

So sometimes a sector never quite reaches bargain levels but when it's making a bullish move, perhaps that's not so important.