Is the Semiconductor sector a bargain yet?

November 02, 2009
Semiconductors led the market up and now they are leading the market down. What gives?

First, let's look at where we've been and where we are today. The chart below covers the period from the March low to today, November 2, 2009. 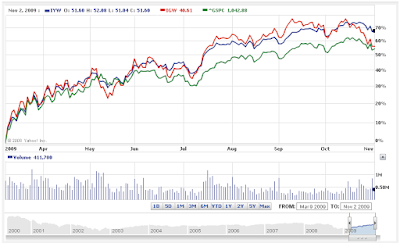 Around the middle of October, however, semiconductors began to underperform. By today, semis were significantly below the overall tech sector and returned to the level of the S&P 500. The sector's growth premium had essentially been wiped out.

This flagging performance of the semiconductors coincided with earnings season. Results of many stocks in the sector were respectable and forward guidance was generally positive. Yet stock prices in the sector stopped rising. As markets began to correct in the last two weeks, the slide in semis only accelerated.

Is the drop warranted?

Is there a good reason for semis to be on the retreat? No bellwethers in the sector reported horrific earnings. On the contrary, bellwethers like Intel (INTC) exceeded expectations.

Just today, the Semiconductor Industry Association announced that sales for the month of September and the quarter ending in September were up. Worldwide semiconductor sales are shown in the chart below. 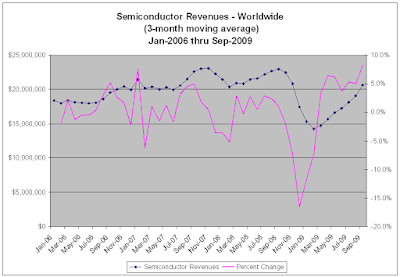 The chart shows that worldwide sales have been increasing steadily for months now and even accelerated when comparing September to August.

The next chart shows semiconductor revenues for the Americas. This probably more closely tracks the results for those stocks in IGW. Here again revenues have been increasing steadily though maybe not as steeply as worldwide sales. 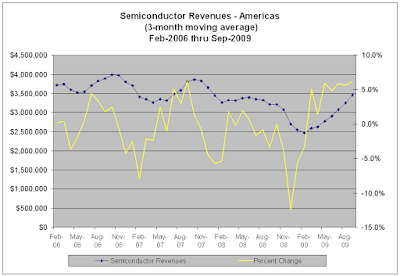 In both charts, current levels of revenue are still below year-ago levels.

SIA President George Scalise stated that sales in the quarter were above expectations, and that September sales "were in line with historical patterns, reflecting increased demand from end-users as they began the build for the holiday season." He noted that PC and cell phone sales are running ahead of previous forecasts and that "Sales are running well ahead of the worst-case scenarios projected early in the year, and we are optimistic that total sales for 2009 will be better than our mid-year forecast." 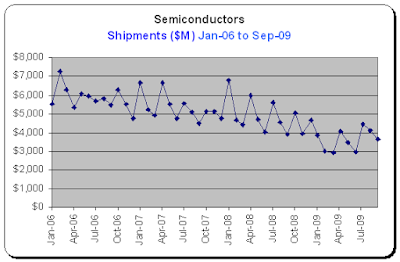 This chart says that the closer we get to home, the U.S.A., the weaker the results. Month to month, shipments have shown quite a bit of variability (they are not smoothed as in the charts based in SIA data) and, though it appears a bottom is in, the way forward does not appear to be smooth.

Investors are currently trashing former market leaders. For those who are looking to pick up an ETF with improving sector fundamentals and good growth potential, keep an eye on the semiconductor sector; it could be at bargain levels soon.

We have already mentioned IGW but my favorite has been the ProShares Ultra Semiconductor ETF (USD). I was recently stopped out of USD but under the right conditions I would buy it again, for example when IGW gets down to around $38.

The bottomline is that the fundamentals of the semiconductor sector seem to be steadily on the mend yet prices are dropping. This is an opportunity in the making. We just need a little patience.

Disclosure: no positions at the moment