November 25, 2009
The Advance Report for Durable Goods for October was released on Wednesday; Bloomberg characterized it as "tepid". That was a fair statement. As usual, we'll zero in on the Tech sector and see how the hardware vendors performed.

Typically, investors pay the most attention to shipments and new orders. This first chart shows the results for Computers and Electronics Products which is the summarized category encompassing most high tech hardware manufacturing including computers, peripherals, storage, semiconductors, communication and networking equipment. 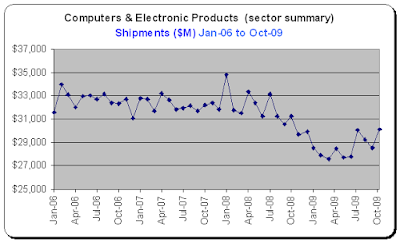 It's a relief to see shipments increasing after two months of declines. Not only that, there seems to be confirmation that the lows are now behind us.

This next chart shows shipments for the Computers and related products sub-category. 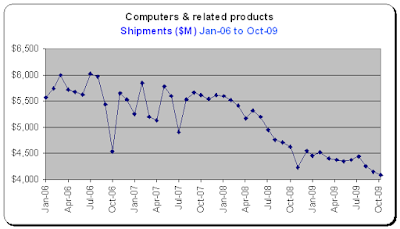 Ouch! Shipments for Computers and related products dropped to a new low. Gartner and iSuppli have not only been forecasting increases in PC sales they have been ratcheting up their forecasts for the last few months. So far, actual data is not supporting these forecasts.

Next is the chart for Communications Equipment. The numbers include both defense and non-defense equipment. 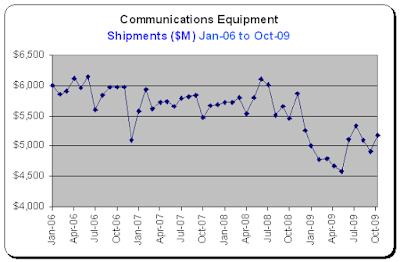 There has been some worry about this segment. With the perception that the new administration in Washington is less likely to support the defense industry, it is perhaps some surprise that shipments are up reasonably strongly here.

This next chart shows Semiconductor shipments.

Semiconductors were the stars in October. Shipments increased 25% month-over-month and seem to confirm the up-trend that started during the summer.

Now for the forward looking measure. This next chart shows New Orders for the tech sector as a whole. 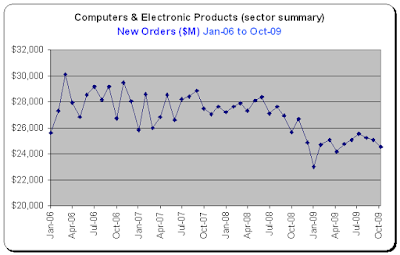 This is not particularly encouraging. New Orders are down for the third month in a row. We are not approaching new lows but the up-trend certainly doesn't look particularly strong.

Our next chart shows new orders for the Computers and Related Products sub-category. As with Shipments in the chart presented above, we see a significant drop off in New Orders, a decline of 7.2% month-over-month.Once again, we are within a hair of a new low. When are those rosy forecasts going to kick in?

Our last chart, New orders for Communications Equipment, is presented below. 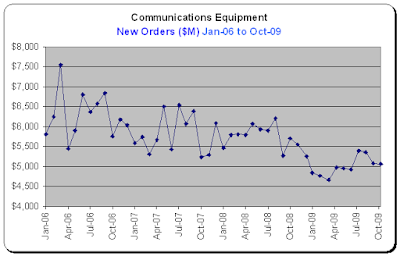 The slight decline in October is at least better than the sizable decline we saw September.

Tech has been underperforming gold and materials over the last couple of months and a few of these charts help to explain why.

Despite the buzz around smart phones, PC sales being driven by the release of Windows 7 and positive results and outlooks from bellwethers like Cisco Systems (CSCO), Intel (INTC) and Hewlett-Packard (HPQ), it appears that the hi-tech hardware sector is still limping along with inconsistent results.

The silver lining in this cloud, however, is the semiconductor sector. Most hardware is dependent on semiconductors. With shipments up so strongly in the chip sector, it suggests that the other sectors will soon see some of the growth that Gartner and others are predicting.

Let's hope those forecasts are right.