September 16, 2009
Oracle released earnings after the close today. The stock immediately fell several percent after hours. Was the sell-off justified?

The company indicated that profit rose 4% which was in line with analyst estimates. The top line, however, was a source of concern for investors. 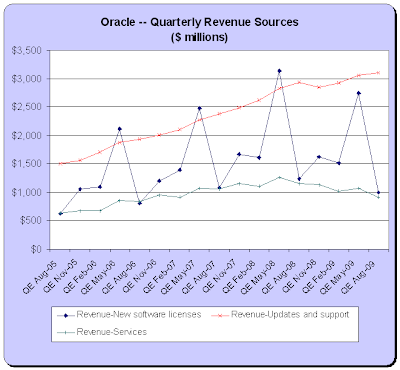 (Data courtesy of Gridstone Research and Seeking Alpha)
As usual, the Updates and Support category showed sequential growth albeit very modest growth. This number includes the software maintenance revenue that tends to provide a solid underpinning to many enterprise software companies.

The bad news kicks in when we look at the other two revenue sources. Services has been a huge money maker for companies like IBM and HP. Investors were not pleased to see that Oracle's Services revenue declined to levels not seen since 2007.

Worst of all, revenue from New Software Licenses fell to $1 billion, below analyst expectations and down to levels last seen back in 2006. This is serious because it's the new licenses that lead to new support contracts which are the cash cows of the software industry. New licenses are the harbingers of growth.

While we have recently seen other tech companies show the kind of growth that indicates the worst is behind us (think IBM, Intel, Cisco), Oracle's contrasting drop in new license revenue is alarming.

So did Oracle whiff? Today's quarterly results feed the bear case that says that enterprise demand has not yet returned and that the rally in tech is over-done. Bulls might say that this is company specific. In any case, don't be surprised if tech lags tomorrow. On the other hand, don't be surprised if the entire market falls and analysts point to Oracle as a catalyst.

Sean said…
Hi, I’ve started to put together a few bits and pieces on spread betting if anybody is interested Trading Spreads any comment of feedback would be much appreciated