Semis on the mend?

September 03, 2009
Many observers have noted that semiconductors led the recent rally but have lately been underperforming. Are semis in a downtrend or are they on the mend?

Here is a screenshot I grabbed from the TradeRadar software. It shows the SELL signal analysis for the iShares Semiconductor ETF (IGW). Note that the SELL signal (in the bottom chart) has not been consummated. In the top chart, the price is well above the trend line and is now solidly above the 20-day moving average. If this ETF can't dip significantly below even the 20-DMA, it is hard to say that semiconductors are in too much trouble. 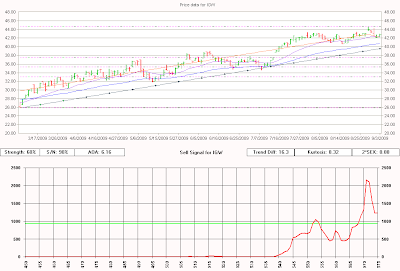 Tracking a couple of bellwethers --

It is a common technique to look at the performance of a couple of bellwether stocks in order to judge the state of an industry sector.

A week ago, Intel (INTC) announced that their outlook for the second half of 2009 was measurably better than what had been communicated in earlier forecasts. That good news was enough to incite a rally in tech stocks and semiconductors in particular.

Today there are two pieces of data related to a company that partners with Intel: Taiwan Semiconductor (TSM). TSM is one of the biggest contract manufacturers of semiconductors in the world so what they have to say can be significant.

Today, Barron's Tech Trader Daily blog featured a post titled "Some Chip Makers Cut Wafer Starts." The post highlights TSM and says that a number of U.S. chipmakers have reduced orders. Offsetting this, however, the author quotes an article from DigiTimes that says TSM is getting greater volume from several other semiconductor houses. He wonders whether this is a result of poor demand on the consumer side.

TSM itself says that it is seeing better than expected sales demand in the third quarter. The company is sufficiently bullish that it has increased its capital expenditures twice. An analyst at Barclays estimates that a projected 20% increase in sales is on the way to becoming a 25% increase. In terms of product mix, it appears that computing/graphics chips are showing the greatest demand, followed by communications and then chips for the consumer market. This seems to confirm the suspicions of the Tech Trader Daily blog that the consumer, especially in the U.S., is lagging.

In the meantime, TSM is proceeding with their technology roadmap, moving to smaller chip geometries. This is meaningful because the more advanced chips can command a higher average selling price.

Charts look good and bellwethers are signaling better times ahead. Now is not the time to give up on the semiconductors.

There are several ETFs that track the sector but the two that I follow are the iShares ETF with symbol IGW (highlighted in the chart above) and the ProShares Ultra ETF with symbol USD.