So far, just a speed bump for tech - Durable Goods for Aug-09

September 25, 2009
The Durable Goods report for August came out Friday and landed with a thud. The headline number for new orders fell a surprising 2.4% month-over-month after a better than expected July. How did things go in the tech sector?

We'll start off looking backwards at Shipments in the month of August. This first chart shows the results for Computers and Electronics Products which is the summarized category encompassing most high tech hardware manufacturing including computers, peripherals, storage, semiconductors, communication and networking equipment. 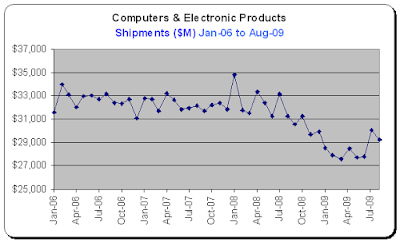 It's clear that tech hit a speed bump in August as shipments fell 2.6%. It is apparent, though, that shipments data shows considerable variation month to month so August's decline, though worse than expected, is still somewhat within the norm and doesn't yet signal the approach of new lows.

This next chart shows shipments for the Computers and related products sub-category. 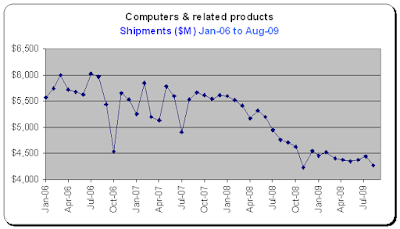 Now here we have trouble. Shipments fell 4% and we're not far from a new low. This measure was just barely beginning to turn up and August's decline really hurts. With companies like Intel projecting improving sales, however, an optimist would advise that patience is necessary here.

I don't usually present the chart for Communications Equipment but here it is today. The numbers include both defense and non-defense equipment. Shipments is this sub-category fell 2.6% but, after two strong months, August's decline is hardly alarming. 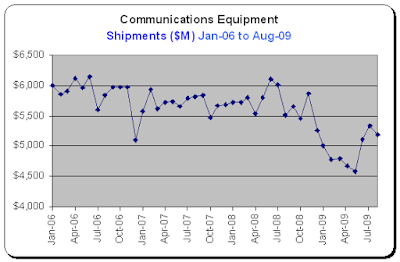 This next chart shows Semiconductor shipments.

Here, shipments fell a whopping 9.9% but the increase in July was so big (over 50%) that the August decline doesn't really dent what looks like the beginning of an up-trend. Note that Semiconductors exhibit lots of variability month to month so August's decline appears to be no big deal.

Now for the forward looking measure. This next chart shows New Orders for the tech sector as a whole. 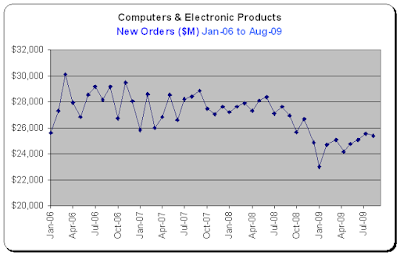 This chart shows that new orders were down in August by 0.7% This is the first decline in four months and it's really a pretty minor decline.

Our next chart shows new orders for the Computers and Related Products sub-category. 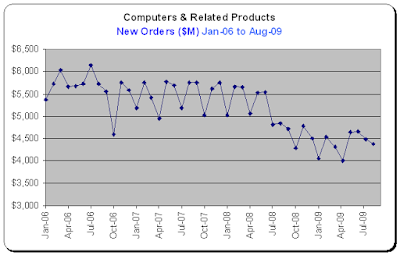 New orders have now declined two months in a row. With July new orders down it is not surprising that, subsequently, shipments in August were down. This does not bode well for shipments in September.

So as not to end on a down note, new orders for Communications Equipment are presented below. 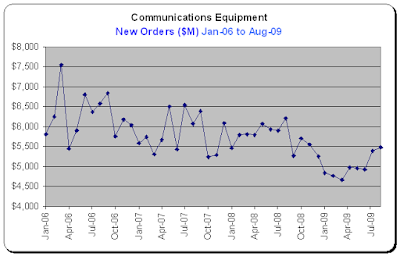 This is the only chart we have today that shows an increase from July to August.

Last month, we concluded that all the charts were showing a clear bottom and tentative up-trends were unfolding. So after taking a couple of steps forward, tech took a step back in August.

Are we heading for new lows? The charts don't paint a picture quite that dismal. Is the up-trend going to be smooth? Hardly. As our charts show today, it will be a jagged and uneven path for tech manufacturing as it recovers from the depths of this downturn.