One of the hardest hit sectors in the downturn has been semiconductor equipment. With plunging demand for semis and rampant over-capacity, manufacturers of chip making equipment have been the zombies of the tech world. Are the dead beginning to come back to life?

Today Applied Materials (AMAT) was upgraded by a Citi analyst based on strength in orders for equipment used to make photovoltaic cells. Analyst Timothy Arcuri believes that Applied Materials is about to sign a "significant" second wave of orders for its SunFab solar production equipment, including four new lines of about 300 megawatts in India. Winning solar contracts in areas beyond China and Taiwan is indeed a positive development.

Last week KLA-Tencor (KLAC) was upgraded by an Oppenheimer analyst who said that said there are "early indications the cyclical recovery ... is blossoming into a real upturn."

A quick look at the fundamentals --

We'll start by looking at a chart of the financials for AMAT:

Explore more AMAT Data on Wikinvest
You can see that revenue and gross profit are slowly beginning to improve after hitting lows earlier in 2009. What is more notable is that margins are increasing rapidly. This is the result of the company aggressively reducing costs during the downturn. Going forward, even modest increases in sales should yield proportionally larger earnings.

This next chart looks at KLA-Tencor.

Explore more KLAC Data on Wikinvest
Improvement in KLAC seems to be slower to arrive that it has been for AMAT. The significant market share in solar equipment enjoyed by Applied Materials is clearly paying off as AMAT seems to be first to recover. Nevertheless, KLAC is showing the same kind of margin improvement and this can't hurt future results.

From an industry-wide perspective, SEMI recently released the August 2009 preliminary book-to-bill ratio. The following chart, going back to June-2008, shows a slight dip in August compared to July; however, the important feature is that orders (the "book" part of the ratio) are increasing and that is a welcome sign. 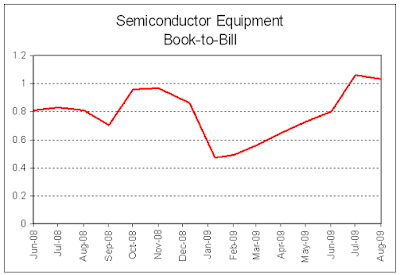 General trends favoring the semiconductor equipment makers include the move to smaller chip geometries and increasing focus on solar production. I have read accounts that some chip making facilities have been retired or scrapped during the downturn. If the economy continues to rebound and tech demand fully recovers, lost capacity will have to be replaced. These two stocks could be the first beneficiaries.