How long does it take Swing Trading Signals to achieve profitability?

September 14, 2009
We offer free Swing Trading BUY and SELL signals. This post looks into performance over time of the BUY signals.

Quick background. The TradeRadar Swing Trading Signals are primarily based on Bollinger Bands. For the BUY signal, we look for the closing price to dip below the lower band and then pop back up above the lower band. We apply a proprietary set of criteria to ensure that the "pop" was strong enough to suggest a viable BUY. We also use Williams %R to check whether the price is in the process of recovering from an over-sold condition.

I looked at how many BUY signals were profitable after 1 week had elapsed, after 2 weeks had elapsed, after 3 weeks, etc. I used a weekly increment because we only run our tracking program on the weekend. This gives us a week-by-week status on our picks. A percentage (the left hand axis in the chart below) is generated by calculating the number of profitable signals divided by the total number of signals. (Yes, I admit it: not every single signal is profitable.)

This chart shows the results: 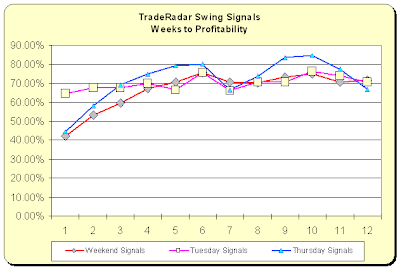 For Thursday and Saturday signals we start out with about 40% of the picks being profitable after one week. After four or five weeks, though, we are seeing that roughly 70% to 80% of picks are showing profits. Not a bad track record.

For the Tuesday signals, more stocks are profitable within the first week and the performance is more consistent as the weeks go by.

The analysis above leads to two questions:
I suspect the answer to both questions has to do with how the market has been trending. Since March, we have had a strongly trending bull market. It has enabled the BUY signals, which were bets on the price cycle of the stocks in question, to continue to show gains over a longer period. The expectation was that the stocks would oscillate between their upper and lower Bollinger Bands but a general lift in the market is allowing many of picks to continue showing gains over the course of months.

This is another sign that for the last six months it's been a pretty good environment for investors.

If you're interested in following our Swing Signals, they are refreshed three times a week: every Tuesday and Thursday night and on Saturday.