The week started with a thud as AIG reported the biggest quarterly loss ever, over $60B. Not to be outdone, HSBC reported a big drop in profits and announced it is shrinking its U.S. operations, adding another 6100 people to the unemployment rolls. Then U.S. Bancorp and Wells Fargo announced big divident cuts. You get the idea: financials under pressure yet again. The one day when the market did rally this week, the financial sector still lost ground.

Economic reports provided no relief. February job losses came in at 650,000 which was inline. It is a sad comment that an atrocious number like that is considered less than shocking. To add insult to injury, the unemployment rate jumped from 7.6% to 8.1%. This was definitely worse than expectations. The Fed Beige Book painted a consistent picture of economic weakness. January pending home sales dropped 7.7%, which was twice as bad as the expected decline of 3.5%. In the meantime, mortgage delinquencies continued their inexorable climb.

In company specific news, retail sales were awful for almost everyone except Wal-Mart. Auto sales were similarly terrible, further feeding fears of a GM bankruptcy filing.

It goes without saying that this market action is killing our TradeRadar statistics. Our charts are getting pretty close to the point where they can't get much worse. Read on for the details... 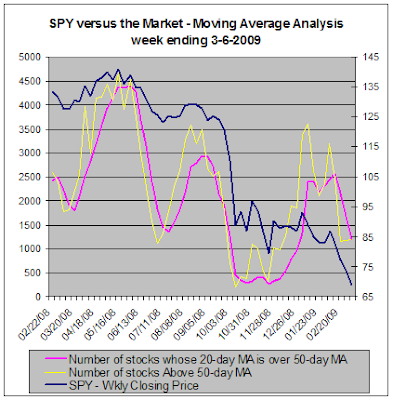 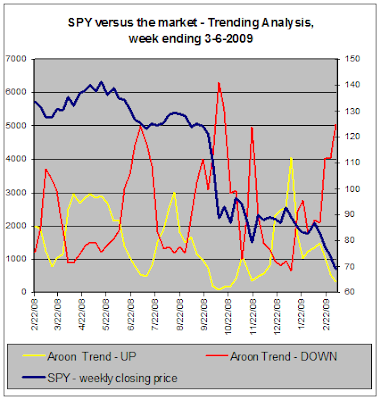 The last few weeks stocks have moved relentlessly downward. Every indicator reflects the exceedingly oversold nature of the current market situation. Our charts show that things can hardly get any worse. Yet the state of the economy offers nothing much to improve investor sentiment.

There are only two themes that provide hope for the markets lately. The first is the "stocks are cheap" thesis. The other is government support. We await the benefits of the stimulus package, the TALF, the TARP, the further bailouts of Citi, AIG and BofA and so on. Ben Bernanke stated the Fed will do whatever it can. The bank stress tests are underway. At some point, investors are looking for all this to start turning the economy around. But when?

What is most anticipated is the discussion in Congress this week of the mark-to-market rule. If the government can't save the banks by pumping money in, the hope is that banks will be given the opportunity to ignore the losses on their illiquid securities.

I can't help but think that we are way overdue for a bounce but, as I write this, I see that the Nikkei has now gone negative after an initial run-up. Is there another week of grinding losses coming up?