March 17, 2009
On Monday the Fed released the Industrial Production and Capacity Utilization report for February. The headline number, a decline of only 1.4%, was not bad enough to cause stocks to give up the prior week's gains. Indeed, stocks rallied strongly today, led by the NASDAQ with over a 4% gain.

Is the gain in the NASDAQ justified?

The following chart tracks the month-over-month percent changes in production in the three tech sectors tracked by the Fed. The numbers are seasonally adjusted. 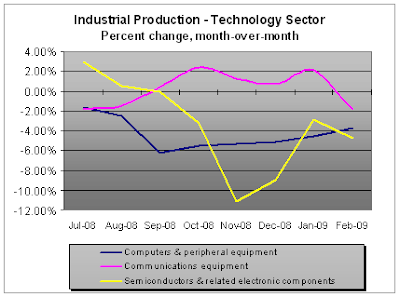 There is a real combination of good news and bad news here.

First the good news:
Now the bad news:
Semiconductors as a leading indicator --

Semiconductors can be considered a leading indicator since pretty much all tech hardware equipment has semiconductors as a large proportion of the required components. It's not a good sign that the decline in semiconductor production increased in February - this could have a negative impact on the other tech sectors in coming months.

Finally, it is worth considering the capacity utilization numbers that were also released on Monday. It is alarming to see that the Computers and peripheral equipment sector is running at a utilization rate of only 51.8%, way below historical mean levels. Semiconductors aren't much better at 52.8% while Communications equipment is doing the best at 79%, still within spitting distance of the sector long-term mean level.

The following chart from the Fed shows how production for Computers and Semiconductors is down roughly 25% over the last year. The drop-off in capacity utilization for the tech sector as shown here is pretty scary.

If you consider the NASDAQ to represent the state of the technology sector, it is clear investors are looking past near-term problems and bidding up the stocks in the index.

Above, I asked if the current rally in the NASDAQ is justified. It is hard to say "yes" to this question when looking at the state of the tech hardware sector.

Though the headline industrial production number indicated a decline of only 1.4%, the decline in the tech sector was nearly three times worse. The capacity utilization rates for Computers and Semiconductors are among the lowest in the Fed's report. And with the semiconductors beginning to sag again, it is hard to have confidence that the tech hardware sector is poised for recovery.

Nevertheless, the numbers reviewed above kind of qualify as "less bad" and that is often enough to stimulate a rally. Continuation of the rally will depend on the continuation of the "less bad" trend in these numbers. So far, only the Computer sector is moving in a good direction. Right now, sentiment is positive and anything better than horrific is considered to indicate a bottom. I hope a bottom is what we have now but the Fed's February report makes that call questionable.