March 25, 2009
The Advanced Durable Goods report for February 2009 was released today. The headline number was positive and the market took off though gains were moderated by the close.

The headline number for New Orders registered a gain of 3.4% where most analysts expected another decline. Much was made of the improvement but things were not all that great when digging into some individual sectors.

As we always do, we will focus on tech and once again the news is dismal. The following chart shows the Shipments data for the entire tech sector as represented by the Computers and electronic equipment category. January data was revised downward and the February shipments number showed another decline though of only 2%. 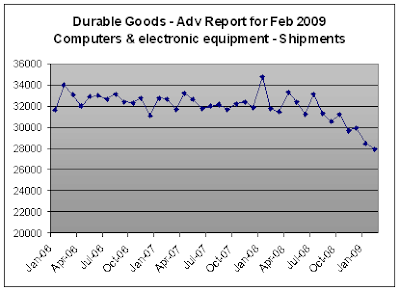 This next chart looks a little deeper into this category at the Semiconductor sub-category. Chip ETFs were screaming higher earlier in the day then someone must have realized the data in the Durable Goods report didn't actually support a rally in chip stocks. January shipments were revised downward and February shipments were down a whopping 21% lower than January's.

Our third chart shows Unfilled Orders for the whole category of Computers and electronic equipment. Here we have another decline but at least the decline is a modest 0.5%. 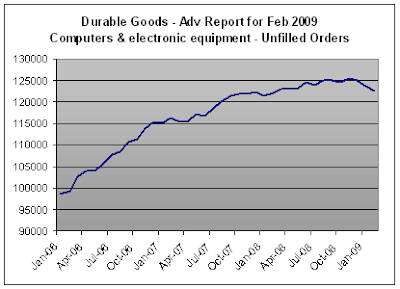 We've saved the best for last. New Orders is the only measure that showed an increase for the tech sector, rising 5.6%. Effectively offsetting declines in other sub-sectors (Communications equipment and Semiconductors) the Computers and related products sub-sector was up over 10%. 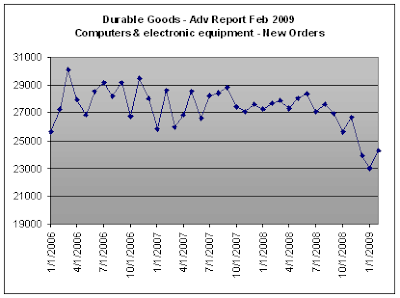 Today's enthusiasm resulting from the rise in the headline New Orders number should be tempered with caution. New Orders have a tendency to be canceled or delayed during economic downturns. Note that Unfilled Orders again showed no improvement. Likewise, shipments continue to decline and in the case of Semiconductors broke to a new low.

Seasonally, this is typically a slow time of the year for the tech sector so weakness is not unexpected. It would be nice, however, to see at least a month or two of increased shipments that prove that orders are not being canceled.

Meanwhile, the market is rallying strongly and a rising tide is lifting the tech sector boat regardless of the underlying economic situation. It's hard to advise holding off on tech but the numbers still don't add up.