Weekly Review - can bulls make it two weeks in a row?

March 15, 2009
I said in last week's review that our charts looked like things could hardly get any worse. Indeed, Monday provided a bottom and was followed by an explosive rally. Our charts are now looking a little better.

Major averages gained roughly 10% and the former laggard, the Russell 2000, became the leader with a 12% gain. The Financial sector tacked on 34% this week, mostly based on the fact that Citi, Bank of America and JPMorgan Chase all declared they were profitable in the first two months of the year though no details were provided (like what further write-downs might be in store). It was still welcome news and better than we are used to receiving from many banks, and so stocks were off and running. As the debate over mark-to-market accounting picked up volume in Washington and in the financial press, investors took heart that the rules might be eased, further supporting the skyrocketing financials.

It is clear that sentiment has turned 180 degrees and bad news is once again good news. For example, GE lost its AAA rating but the stock went up because the downgrade could have been worse. Retails sales declined but not as bad as expected so the data was ignored. Initial jobless claims increased yet again but, hey, when there's a rally underway, who cares about employment?

Last week I mentioned that stocks would have a lot of work to do to get our charts looking bullish again. Well, a lot of work was done and there is definite improvement but can we say things are bullish? Let's take a look at this week's TradeRadar statistics 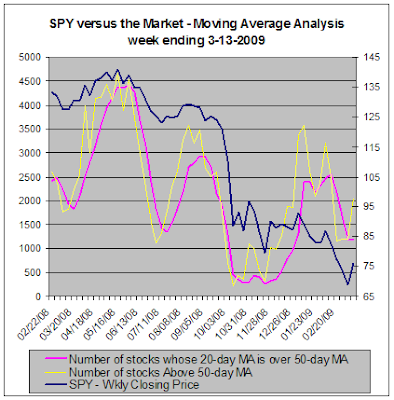 We got a nice jump this week in the number of stocks above their 50-day moving average. As I said, though, stocks have a lot of work to do. The number of stocks whose 20-day MA has crossed above their 50-day MA has barely changed. So, far things appear to be looking up but it might be hard to go all out bullish based on this chart. Still, the journey to higher prices has to start somewhere and it looks like we made a decent start this week. 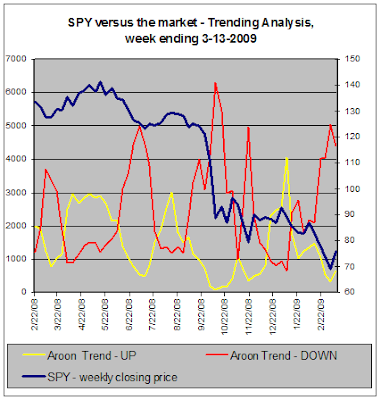 Similarly to the chart above, this chart shows that stocks are improving but still have a long way to go. It takes more than a few days of gains for the Aroon indicators to begin signaling a change in trend from down to up; hence, we see only modest improvements in this chart despite the strong gains we saw this week. Follow-through in the next weeks will be very important.

Below is a daily chart of the S&P 500 that shows the nature of this week's rally. Note how the index broke through to the upside right through previous resistance in the area of $740 (the green horizontal line). 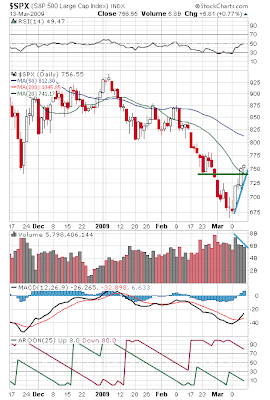 On the other hand, note how volume was strong the first day of the rally and has diminished each day since. The slopes of the price action and the volume are drawn in blue. This is known as a divergence and it is not a good sign.

The TradeRadar charts above are indicating the technical situation is definitely improving but there is still a ways to go before the "all clear" signal can be given.

As much as I would like to jump on the "bottom is in" bandwagon, there are still indications that all is not well with the economy or this rally. I'll list a few:
In summary, the safe haven trade is still a strong alternative to risk acceptance and volume doesn't confirm the breakout despite the strength of the breakout. It's true that bear markets often end before employment bottoms. Today's bear market, however, follows a period where employment did not grow as fast as it usually does during boom times. The years since the bursting of the Internet bubble are often referred to a "jobless recovery". To me, this suggests the employment situation could keep pressure on stocks longer than usual as markets struggle to establish a bottom.

This past week's rally took place against a backdrop that had very little in the way of economic reports the could discourage investor sentiment. Coming up this week, however, there is a full roster of reports that could influence the markets including the Empire State manufacturing index, Capacity Utilization, Industrial Production, building permits and housing starts, PPI and CPI, weekly initial jobless claims, the Conference Board's index of leading indicators and the Philadelphia Fed manufacturing survey.

So is this rally tired? As I write this, the Nikkei is up strongly on hopes that government action will stimulate the world economy. The G-20 released a statement indicating they would focus on cleaning up bank balance sheets and restoring lending. Nothing goes up, or down, in a straight line so a bit of a pullback could be expected; nevertheless, it seems the path of least resistance is going to be up for another week or so. Sentiment seems to be much more positive now; investors may show the confidence to shrug off more bad economic reports. Stocks have already moved above the November 2008 and March 2009 lows so the most immediate resistance levels have been surpassed. The earnings season has pretty much finished so we have a few calm weeks before the next batch of potentially bad company results can derail this rally. It seems we are in at least a temporary sweet spot and the baton has been passed to the bulls.