Semiconductor Equipment Manufacturers - what does this month's Book-to-Bill signify?

March 20, 2009
The SEMI trade group released the February 2009 Book-to-Bill Report for North America-based manufacturers of semiconductor equipment. Rather than list the numbers in detail, we'll just present the charts below (values in millions of dollars, February numbers are preliminary).

Before digging into the numbers, I expected to write another post on how the semiconductor equipment sector was crashing even further. But maybe we can say there's light at the end of the tunnel.

This first chart shows that billings in dollar terms are decreasing and, of course, that is bad. Bookings, however, now seem to be decreasing at a much slower rate; they are down only 5% month-over-month. This might not sound that great but from November to December 2008 bookings dropped 26% and from December 2008 to January 2009, they dropped over 52% so this is very welcome reduction in the rate of decline.

Bookings comprise the forward-looking aspect for the industry, similar to new orders. The indication now, after the huge drops seen in previous months, is that in the near term maybe things won't be getting too much worse. 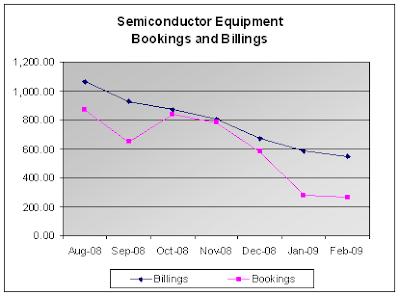 This is not to make light of the fact that both bookings and billings are at historic low levels, the worst since SEMI started keeping records. Furthermore, the numbers for January have been revised downward and February 2009 is 78% worse than the previous year. Still, the downward momentum has begun to slow and that is good news for the industry.

Further suggesting that a bottom might be in sight is the Book-to-Bill ratio. The following chart shows that Book-to-Bill stopped falling in February and actually moved up though only very slightly. After the devastation registered thus far in this sector, even a slight positive becomes a welcome sign. 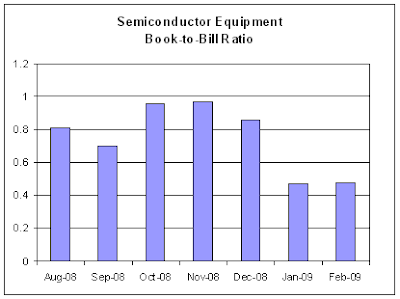 There's no great rush to go out and buy the big names in this sector such as Applied Materials (AMAT), KLA-Tencor (KLAC) or Lam Research (LRCX). Capacity utilization is low, margins are compressed, sales are at multi-year lows.

Nevertheless, February's numbers might show that the sector is engaged in a "bottoming process". Could things get worse? Possibly. Do two months make a trend? Possibly not. But this is the best news the sector has had in months. Given the current levels of bookings and billings, that is somewhat of a sad statement. But for tech investors, this may represent a whiff of hope.

Disclosure: no positions in any stocks mentioned