March 29, 2009
Major averages added over 6% this week despite the fact that there were only a couple of days when stock prices actually rose. Still, that was all markets needed to show yet another big weekly gain as this rally continues to drive stock prices steeply higher.

The biggest catalyst occurred on Monday when the Treasury provided details on the plan to remove toxic assets from bank balance sheets. Investors loved it, stocks rocketed upward and that positive sentiment helped carry stocks most of the week.

In terms of economic reports, investors accepted the 6.3% decline in GDP as better than expected and the usual 650,000 jobless claims as "in line". There was debate over whether housing is improving as seasonal factors and plunging prices are beginning to generate a few purchases here and there. Specifically, existing home sales in February rose 5.1% month-over-month and February new home sales increased 4.7% month-over-month. As many commentators, including Barry Ritholtz, often point out, the month-over-month numbers are seldom instructive; it is the year-over-year numbers that are important because the housing market is susceptible to such deep seasonality. Looked at from the year-over-year point of view housing is still deep in the doldrums with new home sales, for example, still down over 40% from February 2008. Furthermore, there remains more that 12 months of outstanding inventory that will continue to pressure new home sales. By no means are we out of the woods in the housing sector but investors are beginning to think things won't get much worse and indeed may only improve from here.

The Durable Goods report was another example of low expectations being exceeded to the up side. There was a decent new orders number reported and that was the major focus. Shipments and unfilled orders, however, continued to show declines but investors shrugged off those numbers as not sufficently forward-looking. With new orders registering the first improvement in any measure in the Durable Goods report for months, investors were happy to accept it as a sign that things are improving.

And so the rally continued further into short-term over-bought territory. This had the effect of boosting many of the indicators that we track and report as TradeRadar statistics. Let's take a look at this week's results. 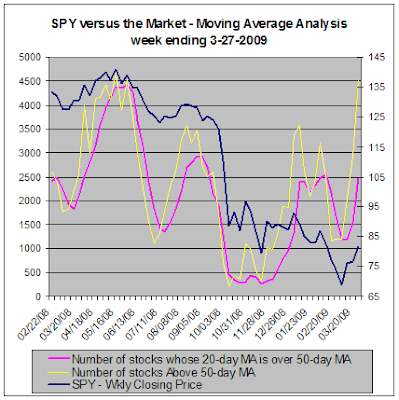 OK, I would like to interpret this chart as unabashedly bullish but I'm afraid that there are extremes being reached that suggest a pullback is close. With more than 60% of all the stocks we evaluated above their 20-day moving averages we are now at the highest level since summer of 2008. The number of stocks above their 50-day MA is also rapidly increasing though it hasn't hit an extreme level yet; nevertheless, it would appear that prudence and caution are the appropriate watch words after such a quick run-up. 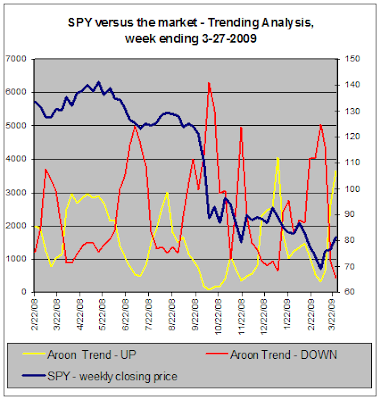 Though the economy is still in recession, the feeling among investors for the last few weeks has been that we have reached a trough. I hope that's true but so far, most economic reports have only confirmed that the decline in indicators of economic health is slowing, not bottoming or improving. It may be easier to catch the falling knife now but for most longer-term investors, there is no good reason the chase this rally.

This coming week, we'll have a good number of new economic reports which might help confirm whether a bottom is being formed. We start off with Consumer Confidence, then the Case-Shiller Home Price Index, Chicago PMI, the ADP employment report, ISM Index, pending home sales, auto and truck sales, the weekly initial jobless claims number, factory orders, hourly earnings, the Nonfarm Payrolls and Unemployment reports and finally ISM Services.

In other words, we'll get the latest readings on housing, manufacturing, services and employment - pretty much everything that is economically important. If the majority of these reports come in better than expected we could see caution thrown to the wind and further stock price gains.

And don't forget, the G-20 are meeting this week. Discord and disagreement could be unsettling to the markets. On the other hand, it could all be dismissed as political posturing. Given how much the actions of Washington have impacted stock prices lately, though, this meeting could have greater influence than usual.

In the meantime, be careful about rallies inspired by end of month window dressing. There will be better buying opportunities soon enough.