March 01, 2009
In the face of a week full of government actions and lousy economic reports the markets responded by dropping like a rock. Major averages finished the week down between 4% and 5%. The S&P 500 finally closed below its November low, just as the Dow did a week ago. This is not a good thing, especially since the NASDAQ and the Russell 2000 are getting close to their lows, as well.

Again, the government was at the center of a number of market-moving news items. The Treasury took a larger stake in Citi by converting preferred stock to common stock and providing Citi a boost in its measure of tangible common equity. Bank stress tests were announced and apparently 19 of the biggest banks will be evaluated over the next couple of months. The new administration's budget plan was revealed and health care companies, especially those in the managed care sector, plunged in response. The budget also suggested college students should borrow directly from the government so student loan lenders and some of the for-profit schools tanked. On Tuesday, Ben Bernanke delivered his semi-annual briefing to Congress and his tone was up-beat enough to allow the market to rebound from Monday's big loss.

There were a number of high profile dividend reductions from the likes of General Electric and JPMorgan-Chase and it is adding to the sense that too many companies are cutting dividends lately.

The negativity in market action took its toll on our TradeRadar statistics and our charts are not particulary encouraging. Read on for the gory details... 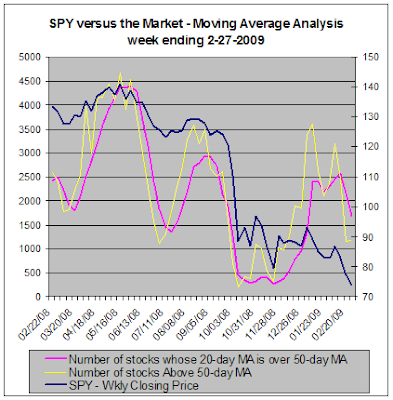 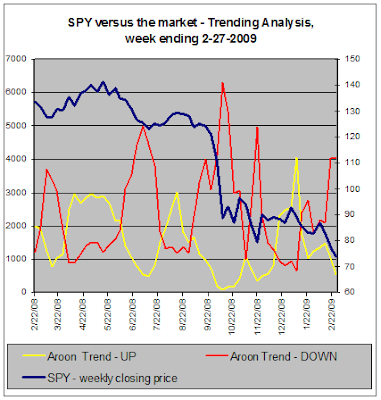 From a technical analysis point of view, stocks have been acting very shaky. It's hard to believe how the averages have moved relentlessly downward. Each day it seems a bounce is due but it never quite happens. The Dow and the S&P 500 are both hitting new lows yet the NASDAQ and the Russell 2000 are still roughly 9% and 7% above their November intra-day lows, respectively. That's good, right? The worrisome factor is that both the NASDAQ and the Russell 2000 have broken down below their upward trend lines just like the Dow and the S&P 500 have. So all four averages appear to be establishing new down-trends and the lows from late January, previously acting as support, will now be resistance.

Economic reports this week seemed to intensify the gloom in markets. Instead of bad news being shrugged off, bad news was taken at face value and stocks suffered. Sentiment now seems weak and investors almost seem shell-shocked and resigned to falling markets. And why not? There are at least as many indications things are getting worse as there are indications that things are stabilizing. And this seems to be a world-wide phenomena.

So, with negative sentiment and sagging technicals, markets are staggering out of February. Of course, when it seems things are just totally awful, that's when the rallies occur. What do you think? Can stocks dig themselves out of this hole? Let's hope this new month will be better than the one that just ended.